I picked up Ghost Recon: Advanced Warfighter 2 (GRAW2) for the PLAYSTATION 3 on Friday. I got to play it a bit on the weekend, so I thought I’d give up my first thoughts on the game. I played the game in single player campaign and local multiplayer modes. I haven’t gone online yet, so this article won’t cover that. That’s for Gary to cover! 🙂 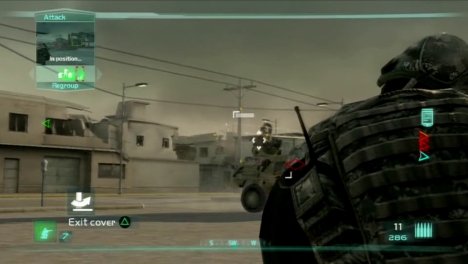 First, let me get two things out of the way. First, the game looks good, but there is some chugging. It’s pretty annoying too, though you do get used to it to some degree. I heard the same complaint about the 360 version, but I don’t know if it’s any worse on the PS3. Second, I found the visual quality of the included multiplayer levels to be highly variable. I don’t know yet if this is a function of playing multiplayer alone or splitscreen, or if the levels are just like that. Let me explain. You can choose to go into splitscreen multiplayer mode, but then only decide to play with one player against bots. I did that a couple times. Anyway, there’s a level that takes place on a dam, and it’s pretty bad when it comes to graphics quality. (This is one I played splitscreen with a friend.) As well, some levels seemed to be pretty flatly lit, with little visual interest. Others were lit quite well, looking quite good. Again, I don’t know if this is because they reduced the quality when playing splitscreen or not. Sometimes the levels looked a little washed out, including the multiplayer menu screen. (No, it wasn’t a problem with my TV.)

Single player. I’ve played through some of the campaign in single player mode, and I have to say that this is a fun game. I’m quite enjoying it. As a ghost, you’re operating in Mexico, dealing with the rebels, and you’re not really suppposed to be there. There are several mission types. You get to play missions with other people on your team, solo missions (which is nice because you don’t have to babysit your teammates), and I’ve also played a mission from a helicopter, shooting at an enemy convoy with a huge machine gun. The mission I haven’t completed now actually lets me call in an airstrike on some tanks. I forgot how to do that, so it took me a couple minutes to figure it out. I thought I’d do it from the tactical map, but no. It’s accessed in the same way you access your ghostmates, the UAV, or the vehicle (I forget the official designation).

Multiplayer is fun too, but the options weren’t quite as flexible when it comes to player loadouts as it was on GRAW1. For example, in GRAW1 on the 360 each player could choose their profile, and the game would remember what options each player chose. On the PS3, you don’t choose a profile, you’re just henning-1, henning-2, etc. But other than that, multiplayer was pretty good. You have several mission types, both co-op and solo, and I’ve only begun to scratch the surface. I tried a mode by myself where I played against bots, and I had to recover 3 flags and bring them back to my home base. I still have to play the game some more to try out more of the modes. If there’s enough demand, I’ll write a follow-up post.

I’m quite happy with my purchase of GRAW2. There’s a lot more depth to this game, multiplayer, than something like Warhawk that just has a couple modes. (Not that I won’t be buying Warhawk too. I have it on pre-order.) So do I recommend this game? Yes I do. It has its faults, but it’s still worth playing.