First off a big question I had was which version to buy, retail or download. After doing my research I went with the retail, only due to one fact. The ability to install demo copies of Warhawk on other PS3’s, which is great for LAN party’s. The Bluetooth headset I could care less about because I already have one. But doesn’t hurt to have a extra.

So here are the benefits of each version: 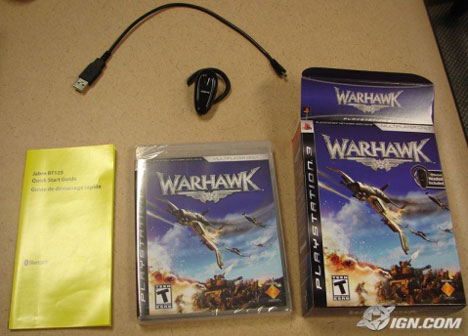 Retail – $60, Nice box, physical disc, extra game trailers, Jabra BT125 headset (charge it via USB), install a demo copy on other local PS3’s, it will cache 789MB for better loading, actually loads about the same as the download version.

Download – $40, No need to leave your house, always on your hard drive, and it’s available now.

Both will eat about the same about of hard drive space. For those wanting to “share” the game with friends via game sharing. Sorry but you won’t be able to do that with Warhawk.

There’s a warning in the game’s description on the store that says it will only be playable through the PlayStation Network account that purchased the game, and only on one machine in any 24-hour period. [Source]

Warhawk Servers Live NOW – 8/26/07
For those of you worried that there won’t be enough Sony run servers do not be afraid. Incognito has just put HUNDREDS of official ranked servers for all to use. Every possible type of game has been created. [Source]

Before I played the Beta I honestly wasn’t planning on getting this game, but after playing it. It turned into a must buy! The Warhawks are a blast to fly and very easy, fighting on the ground is fun as well. And the stages are huge, and the draw distance is great. Overall a amazing game. I’ll see you guys online! 🙂