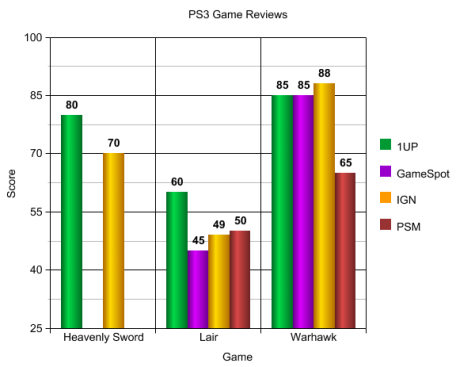 I’ve never played this game and it always seemed like a wildcard, but I never would have thought it would have bombed this bad. Sometimes reviewers are known for becoming overly-emotional and giving an unfair irrational review. Unfortunately, it seems like that isn’t the case; Lair just seems like a genuinely failed game. IGN actually used the sub-title, “a sixaxis suckfest”. Ouch!

Does anyone else feel bad for the developers? Hey, if a game is bad, it’s the obligation of the reviewers to score it as such, and fans such as myself definitely don’t want to buy it. But, those developers put so much work into that title it’s hard not to wince for them.

This looks like an OK title with very mixed reviews rather than the spectacular game we were hoping for. I expected this title to turn out this way, but I’m sure it will make an awesome rental.

The best received game of the bunch. Those scores are very hot and cold. Some people love it, others hate it. Plenty of people are clearly ecstatic about this title and are getting their money’s worth several times over, while others, such as myself feel that the multi-player shooter genre is very crowded and competitive, and there are better alternatives.

I’m really disappointed with Lair, but this is a small disappointment at the start of the season. All the big releases are still ahead of us. September is looking to be a very strong month, but October and November are the peak months with the real AAA titles!