Another DualShock 3 is “confirmed” [Update] 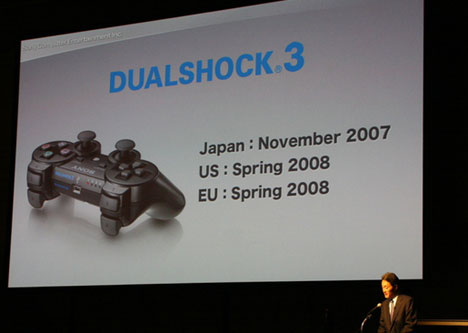 Well how many times have we heard this so far? Anyway, in the latest episode of the 1UP Yours podcast it mentions a few things. The rumbling controllers, and the long awaited 2.0 firmware. I hope the rumble controllers have the PS home button light up too 🙂 If this is true we will find out soon enough, the Tokyo Game Show is the 20th – 23rd of September.

But one question I have is can developers simply enable rumble in past PS3 titles? Or will developers even bother with it in past titles?

That’s right, Burnout Paradise is the first rumble-equipped PS3 game we’ve ever played. Which made us think at the time, if the game is making the controller shake, the controller must be a new version of the Sixaxis!

In fact, the controller we were using to play the demo looked exactly like a standard Sixaxis, except that it had a sticker on the bottom that said “RUMBLE.” It also felt notably heavier than the standard Sixaxis.

We presume this is a prototype of the PlayStation 3’s new rumble controller, whatever it’s going to be called.

The rumble itself felt around the level of PlayStation 2 rumble. We’re not sure just yet if Sony is using any of that next generation technology Immersion has been talking about for the past few months.

As for the rest of the EA event, as well as details from today’s Sony and Konami events, check back at IGNPS3 through the night.