Is this worth buying or not? I’m definitely not short on games to play, but if this is an interesting novelty that can entertain me for at least two solid hours, then personally, I’d be happy to buy for $7. If it’s boring or wears thin faster than that, then I’d rather skip. Two strong opinions so far. Any others? 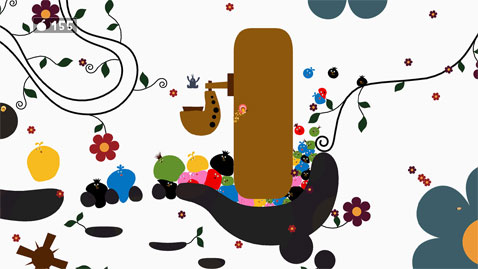 Think LocoRoco, but now imagine you control a butterfly, which when close (about 1/2 a screen away or closer) to LocoRoco, it influences them to follow it.
The world is populated with sleeping Roco, and these Roco wake up when another Roco touches them.
The stage is one big level, but broken into smaller parts, utilizing gates that require a number of Roco to be collected before opening, allowing the Roco to continue further.
The awesome thing is, each section of the level, is actually a loop. If the Rocoâ€™s donâ€™t enter the gate, they simply loop back to the start, to repeat their steps again (the Roco are capable of advancing without micromanagement), giving you another chance to explore and grab any Roco you left.
Basically, think LocoRoco with different controls, which take a little to get used to, but really do work, and the addition of levels that loop back onto themselves, and also more challanging, well hidden Roco to find, alot requiring plenty of LocoRoco teamwork.

Just like the psp title, the levels can be completed rather easily if the player doesnt try to collect the Roco and other items, infact with only 40 of 200 Loco, the entire stage can be finished.

The beauty of the original LocoRoco was that it allowed a player to have a good time and run through the levels, then go back and explore looking for the aditional RocoLoco. Roco Cocoreccho follows this formula to a tee. Without any aditional controls other then the circle button and left stick (and a motion sensitive gate opening action), the player can complete the stage, and then go back and start exploring, or taking alternate paths.

I just bought and played locoroco, and I personally do not recommend it. It is overly complicated for its own good, the gameplay is not rewarding. Just give us some superbly simple levels thatâ€™ll last a minute with all the bells and whistles in the beginning so we can have some sympathy for the meaningless blobs and have some taste of being able to finish a level without brain-work, *THEN* put us in mayhem.