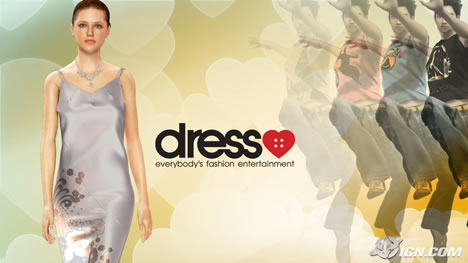 Dress was mentioned at the TGS keynote, but wasn’t explained really until now. Basically there will be a virtual space for Dress where you can dress your avatar, most likely separate from the Home avatar, and you will be able to purchase those clothes as well. Or even trade them with other people. Details are below.

Dress Studio lets you create your own fashion, selecting color, material, patterns and logos. It appears that the game will let players make their own brands. Sony is even looking into letting players send their designs away to have them transformed into real life clothing.

Dress museum is a museum of clothing history. It has some interactive elements where you gather famous scenes from movies and famous characters.

Dress park is a community space that’s meant for players to communicate and exchange gifts, including clothing. Sony will hold official events and fashion shows here, giving players the chance to appear as models. Players can also organize their own shows based around their original brands. This is something that Sony hopes to actively support, Shichisawa said.

Dress should arrive in early 2008, hopefully in time for the public release of Home. I like the idea, I’ll definitely try it out. Wonder how much the clothes will cost.