There’s been a lot of unfair criticism of Heavenly Sword, much like the PS3 itself in my view. Having purchased the game on Friday and finally finishing it today, I thought I’d share my views on one of the best games (in my opinion, if that wasn’t clear enough for you) currently available for the PS3.

Firstly, a little warning to those that haven’t yet finished the game or those that intend to buy it but haven’t got round to it yet. This post will contain a few spoilers. Continue reading at your own peril. 🙂

The game starts off with you on a battlefield outnumbered by 1000s of enemy soldiers. Dozens of enemies attack you at once with hundreds more surrounding you, waiting for their chance to attack. It’s a breathtaking start to the game.

This, I believe, is also where some people get the impression that it’s a similar game to the Dynasty Warriors series. It’s not. It’s more akin to Devil May Cry, Ninja Gaiden or God of War than the DW games.

She then awakens on an empty plain, which is where you start every new chapter. Brilliantly, you can select any chapter or an individual stage from each chapter once you’ve completed it, meaning you can replay any section that you want in order to collect all the glyphs from each stage, or maybe you just want to replay a certain section of the game for the fun of it.

Either way, it’s a great option for players to have.

The story then goes back 5 days before Nariko picks up the Heavenly Sword, in the run up to the invasion of King Bohan and his massive army. You then battle your way through the 5 days that leads to Nariko’s downfall.

This seems like as good an opportunity as any to mention how great the voice acting is in HS. Andy Serkis is superb, with some genuine laugh out loud moments throughout from the various characters.

A new benchmark has been set for voice acting in a video game and the facial animations are excellently done. They definitely add to the overall experience.

Heavenly Sword also contains one of the greatest one liners found in any game. We all remember the “flip the giant enemy crabs and hit their weak spot for massive damage” comment right? Well Kai (more on her shortly) needs to get the password from a guard in the West tower and after finally confronting him, she lowers her bow from his head to his groin and says: “Give me the password or I’ll hit your weak spot for massive damage” brilliantly timed with a smirk! I was 😆 at that for a few minutes. Truly awesome.

There are plenty of excellent moments similar to that throughout the game and the facial expressions and acting throughout, are second to none.

Kai has to be one of the greatest sub characters ever created. She’s a joy to control and apart from her first mission which is a tough introduction to using her bow, her stages are some of the best in the game. She’s definitely worthy of a game of her own. 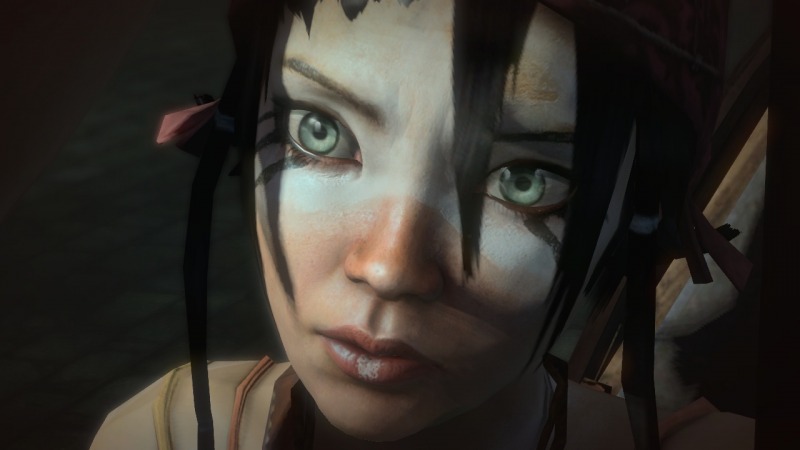 The bosses are also some of the most imaginative and bizarre boss characters outside of a MGS game. Flying Fox is quite hilarious but a pain in the arse sometimes. He is also responsible for one of the most heartbreaking moments in the game involving Kai. I’m not going to spoil it for you, go and see for yourselves.

The enemies you come across are varied enough to force you to use different moves and tactics in order to defeat them. You have to use either the Power Stance, Ranged Stance or Speed Stance to defeat certain enemies. Some can only be defeated by using a counter attack. You can’t defeat each enemy using the same combo move over and over again.

Nariko’s Superstyles and counter attacks are visually stunning and I never got tired off seeing Nariko hand out an old school vasectomy or snap a grunt’s neck or perform one of her superb aerial moves resulting in the surrounding enemies eating concrete. Each one looks amazing and adds to the wow factor.

There are 3 levels of Superstyle moves for each stance, each increasing the amount of damage you do. All of them look superb.

Anybody that says the combat in Heavenly Sword is shallow or repetitive, must surely think the same about Devil May Cry, God of War and Ninja Gaiden Sigma.

You will get the best out of all these games by mastering the moves, and adjusting to each situation, rather than mindlessly bashing buttons, but Heavenly Sword takes the visual splendor of pulling off these moves to a new level. Combat is a joy and criticism in this area should be aimed at the genre as a whole rather than putting down Heavenly Sword for failing to offer anything new.

The lack of a jump button is initially missed, and it’s inclusion could definitely improve how you navigate some areas and improve the amount of combos available to you, but it certainly doesn’t lessen the gameplay experience.

The camera took a few minutes to get used to as I’d just came straight from finishing Ninja Gaiden Sigma, so was used to using

to control the camera. You soon get used to it and you can’t blame the camera for any of your deaths unlike NGS.

There are no framerate drops. Even when there are 1000s of characters on screen, the game doesn’t suffer any slowdown or pop up. Some of the areas are quite magnificent to look at. There were a few occasions where I just stopped and had a look around at the surrounding area. The jungle stages contain some of the best for visuals in the game.

Definitely a showcase title for the PS3 and if anybody needed convincing why they should upgrade to a HDTV then this game should convince them. I’m using a 40″ 1080p HDTV and it’s visuals like this that justify my decision to go HD.

Easily the one area that failed to impress me. I tried using the tilt controls for firing Kai’s bow, or throwing shields to open doors but I was never comfortable using them. They work OK but I recommend you turn them off at the beginning and using the analogue stick instead.

You definitely have more control over what you’re doing with the motion sensor controls turned off. This is not just a criticism of Heavenly Sword in this regard. Every game that I’ve played on the PS3 that has the option to use motion controls are usually turned off ASAP.

The only games that I feel uses them to any great effect are Blast Factor and flOw. Sony would’ve been better leaving them out altogether and getting vibration in from the start but that’s just my opinion. I’m sure loads of people (Pc 🙂 ) enjoy using the motion controls in the Sixaxis.

Heavenly Sword is one of the finest games in it’s genre and is easily one of the best looking games currently available. If you like DMC, NGS or GoW then I highly recommend you buy Heavenly Sword. Even if you don’t normally enjoy these type of games, it’s worth a rental.

The longer you play it the more it makes an impact on you, and you start to realise that some of the criticisms levelled at it by various websites and magazines are over the top or unjustified.

Don’t rush through it and take the time to enjoy the experience. You won’t regret it and just think what Heavenly Sword 2 could be like…