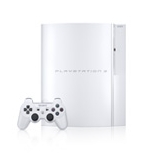 Sony has announced the 40GB PS3 in Japan, to be on sale on November 11th. The cool thing is that it’ll come in two colours: the we’ve-seen-it-before transparent black, and a new ceramic white. Sony is also decreasing the prices of the 60GB and 20GB PS3’s to 54,980 yen and 44,980 yen, respectively, starting October 17th. That means that the new 40GB PS3 will be cheaper than either, because it’ll clock in at 39,980 yen. (All prices include tax.) Most interesting…

On top of that, Sony will also start selling the DualShock 3 on November 11th for 5,500 yen including tax, in both white and black. Will they be bundling this controller with the 40GB PS3? I would hope so, but I haven’t seen anything to indicate they are. Stupid.

Here’s the salient part of the press release:

Tokyo, October 9, 2007 â€“ Sony Computer Entertainment Japan (SCEJ), a division of Sony Computer Entertainment Inc. (SCEI) responsible for business operations in Japan, today announced that it would launch a new PLAYSTATIONÂ®3 (PS3â„¢) model in Japan on November 11th at a recommended retail price of 39,980 yen (including tax). The new PS3 is equipped with a 40GB hard disk drive (HDD) and comes in two color variations of â€œClear Blackâ€ and newly introduced â€œCeramic Whiteâ€ to meet a variety of usersâ€™ lifestyle and preferences. Along with the introduction of the new model, the company also announced that effective October 17th, 20GB HDD and 60GB HDD models currently available in the market will have a recommended retail price of 44,980 yen and 54,980 yen (including tax) respectively.

Moreover, DUALSHOCKÂ®3 Wireless Controller which was revealed at Tokyo Game Show, will become available in the Japanese market on November 11th in two colors of â€œBlackâ€ and â€œCeramic Whiteâ€ at a recommended retail price of 5,500 yen including tax.

While holding the state-of-the-art technologies which define PS3 as an advanced platform to enjoy next generation interactive entertainment contents on Blu-ray Disc as well as via broadband network at home, new PS3 comes in the market at a highly attractive price. Reflecting both the increased efforts to improve software development environment and the availability of a more extensive line-up of PS3 specific titles, the new PS3 will no longer play PlayStationÂ®2 titles.

On the software front, more than 40 disc based software titles for PS3 as well as more than 30 of downloadable new PS3 games and demos via PLAYSTATIONÂ®Store in Japan have been released to date in the Japanese market since the systemâ€™s launch in November 2006 and more innovative and exciting new titles are expected to be released toward the holiday season, which include â€œDynasty Warriors 6â€ (KOEI Co., Ltd.), â€œWORLD SOCCER Winning Eleven 2008â€ (Konami Digital Entertainment Co., Ltd.), and â€œTIME CRISIS 4 with GUNCON3â€ (NAMCO BANDAI Games Inc.) as well as key upcoming first-party titles such as â€œGRAN TURISMO ï¼• Prologueâ€, â€œRatchet and Clank FUTURE:Tools of Destructionâ€ and â€œHeavenly Swordâ€.

Additionally, in collaboration with Sony Pictures Entertainment(Japan)Inc., SCEJ will give a complimentary copy of the original Blu-ray Disc movie, â€œSpider-Manâ„¢ 3â€, to 200,000 purchasers of the 20GB HDD and 60GB HDD models that are currently available in the market from October 17th as well as new PS3 from November 11th as part of its marketing campaign.

SCEJ will continue to further expand the PS3 platform and create a new world of computer entertainment with innovative and exciting new titles and an enhanced line-up of PS3 systems.