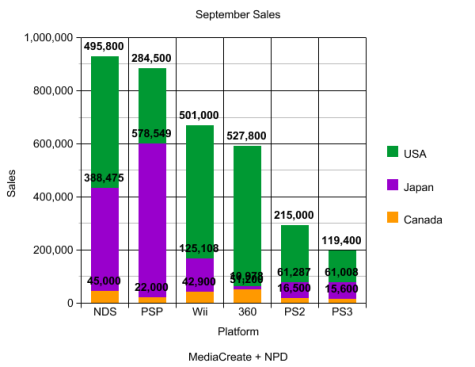 I’ve compiled and formatted NPD numbers for Canada and USA and MediaCreate numbers for Japan. I don’t have easy access to sales figures for other territories, so they are not included.

The biggest surprise successes are the 360, due to Halo 3, and also the PSP, due to the redesign. PS3 sales are light, especially when held next to the 360 numbers.

Currently PS3 sales are slightly over five million worldwide, and Sony plans to reach eleven million by the end of the fiscal year in March, 2008. The big events that should trigger a sales volume surge are today’s price drop, Europe’s price drop earlier this month, the new 40GB SKU that already launched in Europe and set to launch in both US and Canada for $399 US/CDN., the amazing PS3 holiday game lineup, an expected ad blitz, and the normal holiday rush.

(I’ve visually double-checked data, but please leave a comment if any number looks off)