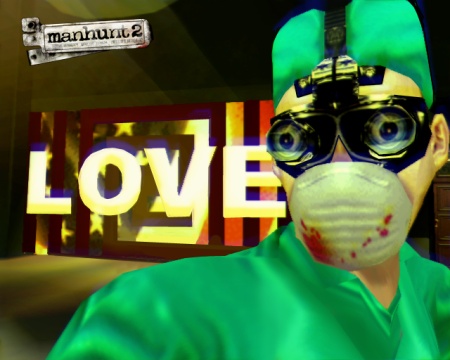 The Manhunt 2 experience is centered around the story. With most games, the player can dislike the story but enjoy the title on the merits of the gameplay mechanics alone. This game isn’t like that. If you don’t become immersed in the story, this game just won’t be fun. This doesn’t mean that the gameplay is bad, it works extremely well, but it just doesn’t work outside of the context of the story.

What this means is, if this story appeals to you, and you get sucked into it, you will love this game. Unfortunately, if you fall outside the audience that this type of thing appeals to, you won’t enjoy this game.

If you like this style of fiction, black humor, and fantasy, I give this game a 9.5. I definitely got that level of enjoyment out of this, and I’m sure others will too. If you are like most people and this just isn’t your thing, then this is a terrible game and I give it a 1 out of 10.

More helpful than a simple numeric rating, is answering the question, “Who will like this game and who won’t?” A quick and easy barometer of whether you like this game, is the movie “Hostel 2”. They have similar dark and horrific stories with a similar type of wit. Of course, Manhunt 2 is also creatively similar to the other Rockstar Games GTA and Bully. If you loved the humor and dialog in those titles, this is also likely to appeal to you. 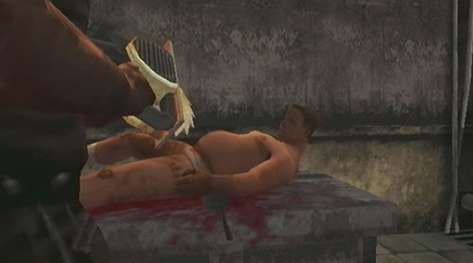 As a game enthusiast, I don’t care. It’s best to leave the debate of all the tired socio-political implications to the lawyers, politicians, PTA groups, and junk news sites. Here, we can stick to discussing the product strictly on its own merits as a game.

The developers were forced to make cuts and changes before the game could make it through the ratings process, but fortunately, these cuts didn’t seriously damage the game, and the story and the overall experience seem to be generally intact.

Compared to the Original Manhunt

– Better story and story telling. I enjoyed the “Running Man” type story of the first title, but this title had more of a puzzle story that unfolds as you progress through the game which fits the Manhunt experience better.
– Better pacing. Each level in this game unfolds more of the story and leaves you wanting more. I always felt a sense of purpose and was excited about moving the story forward, and never like I was merely clearing yet another roomful of enemies. There is not a single boring or overly repetitive level in the whole game.
– Daniel Lamb is a more interesting lead character. James Earl Cash was cool, but just a typical bad ass.
– More variety. The levels are more varied and the weapons and executions are more varied. In the first, I remember watching the exact same executions over and over, while in Manhunt 2, almost every level has new weapons and executions and new environment executions.

– Lacked the quantity and quality of hilarious hunter banter from the first title.
– Lacked some of the creative highlights from the first, such as Pigsy.
– The first had a better dirge-like musical score.
– The Headset. Hearing the sadistic Starkweather talk to you through a headset earpiece was a truly unique and intense experience in the first title. I didn’t have a headset available for Manhunt 2, but Leo’s dialog just isn’t the same.
– Originality. The gameplay elements are largely identical to the first title, so the first title wins on originality. 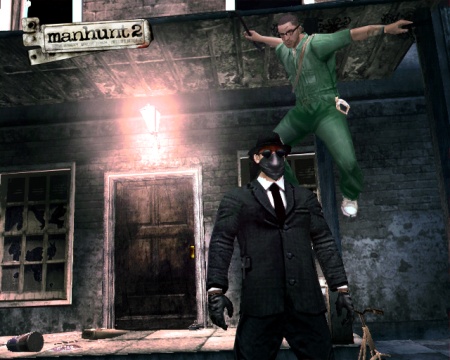 I’ve read a handful of the mainstream reviews on this title. Unfortunately, they completely missed the heart of this game and complained about dated technology, unrealistic AI, camera issues, and other pointless nitpicks.

Guys, here’s how it works: if you become immersed in the game, the technology is more than adequate, the camera is fine, your suspension of disbelief will make the AI seem lifelike, and the game is f’ing awesome!

If you don’t like the game, but force yourself to trudge through it anyway, you will get cranky and easily irritated by insignificant camera issues, last-gen texture resolutions, and other irrelevant quirks just as these reviewers did.

Bottom line: Don’t listen to the reviews. If you think you would enjoy this type of story, then definitely check it out; it’s a very unique title. If it doesn’t sound like your thing, then simply steer clear.