Simpler, cheaper, and better than the Wii?

N’Gai Croal has just posted his ode to the Wii. He reminds me of stock analysts that simply rave about whatever is currently doing really well on the charts. They won’t say anything insightful, but they sure know how to read quarterly reports and turn reports of high profits into cheery stories of wonder and turn reports of losses into stories of gloom.

If you are praising Wii for its simplicity and sales figures, you are missing it’s biggest competition. It’s a hot selling video game console that’s *much* simpler and *much* cheaper, and more child/parent friendly than the Wii.

Can you guess which console I’m referring to? No, not anything made by Sony, Microsoft, or Nintendo. I’m talking about the market leader and sales juggernaut for baby video games: the V-Smile! 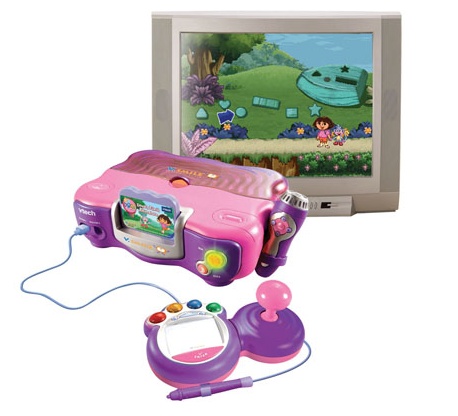 What are the sales figures? I don’t know: NPD, MediaCreate, and vgchartz aren’t tracking them.

How are their games rated? Most sites aren’t reviewing them. Heck, Metacritic doesn’t even list them as a category, despite their high sales figures.

But why not? Those things sell well. I have seen tons of parents who buy those things for their small children. Why doesn’t the video game media cover them? This is definitely a widespread media bias!

Probably for the same reason most fine food media covers obscure recipes and subtle flavors rather than talking about chicken fingers.

The Wii and the V-Smile may own the sales charts, but the adults who like to read and talk about games, want to focus on the more complex and sophisticated titles.