The guys at M80 and Codemasters where kind enough to give me a copy of Jericho to review for them. So here I go 🙂

::: SPOILER ALERT ::: You start out as only controlling Ross, but after a while Ross dies …. sort of. His body dies but not his spirit, but he still needs a body. So he possesses another team member. From then on out you can switch from character to character using the “Possession Interface”. It’s a cool effect, when you switch it shows his spirit flying from his point of view to the next team member. Which is unique, I’ve never seen that in a game before. It nice because you know exactly where the team member is as your flying to them. It’s hard to remember what each team members special ability is at first, but it slowly explains each members power. After a while you get the hang of it.

Here is what each squad members powers are:

Also when Ross possesses someone he can revive fallen team members too, Rawlings can as well on his own. Which can be annoying, because all your doing at times is just running around reviving your team, and it’s not because I suck at the game either. It’s because the team is stuck in such a small space on some levels, it’s like leading them to slaughter. I guess it’s considered a tactical FPS. You can give orders to the team to stay behind, fall back, or move to a specified location. But I never used it really, there wasn’t a need for it I thought. The squad AI wasn’t bad, they hid behind cover when available and even used there powers. 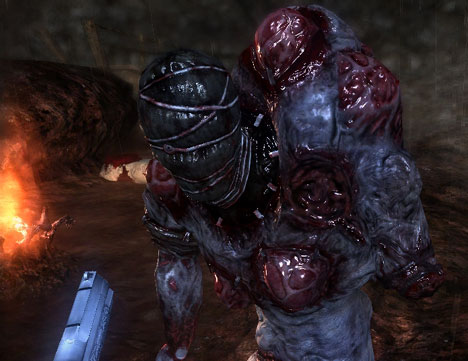 The demon above is the most annoying in the game. You have to shoot all the red things on his body to kill it, or a nice placed grenade, then they explode. If your team is near it they will die instantly, which can take out the whole squad if they are close enough. He’ll even explode if you let it get to close to you. There are times where there are button sequences ala God of War. But it doesn’t seem to fit with a FPS and it’s so unexpected when they do show up you usually miss it the first time. Throughout the game you have to use a certain member of the squad to get past a obstacle or enemy. Sometimes it’s obvious which person to use sometimes not.

There is a nice variety of enemies the farther you progress into the game. Each have there own weakness. The bosses are fun to battle, each better than the last. When you finally get the to final boss, you have to use the teams powers only, regular firepower won’t work. Which was a nice change. But after you beat the final boss the ending was rather sudden and honestly awful. There are some games when you beat it you think to yourself, man what a good game. But with Jericho I felt cheated on the ending. It didn’t explain any of the main questions of the story, and no movie sequence either.

You can unlock extras which have artwork, and bios with background on the characters and enemies in the game. To unlock them you have to do various things. Such as complete a level without being incapacitated, blow up 100 heads, beat certain levels on hard, etc.

Overall there are some great battles though: the ghostly children in the church, the Roman gladiator arena, but for some reason it reminded me of Mojo from X-Men, lol. Graphics wise it’s pretty good, and does of good job of creeping you out. The sound is great too, draws you into the world. The loading times are a little long, but at least you have a story to read while it’s loading. At times it’s very fun to play, then you hate the game the next moment due to the monster I mentioned above and constantly running around reviving your squad.

This review is based on a retail copy of the PS3 version of Clive Barker’s Jericho provided by Codemasters.