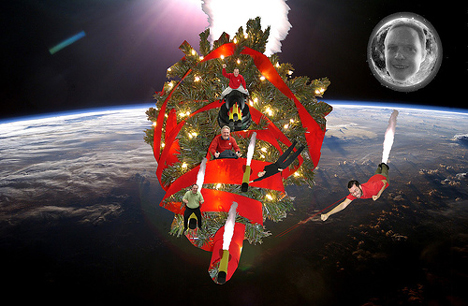 Last Friday at work we had our Information Systems department LAN party (the image above is the department Christmas card I made). We had three PS3’s, and one 360, all running on projectors. Sadly they are all 480i projectors, but it was still fun. After I had the PS3’s set up, I tried to get them all connected so we could have a massive Warhawk battle. I was kind of bummed that the Omega Dawn booster pack wasn’t out in time for the LAN party though.

We have a huge Ethernet hub at work. So we connected all the PS3’s up to that, but the weird thing was the PS3’s couldn’t see each other. The PS3 basically said, I need the internet, where is it? Luckily I remembered that in the office next to us, they had wireless. So I tried that and it worked, and we got all the PS3’s to connect to each other that way. But I think it’s pretty stupid that you “need” the internet just to play a LAN game … at least with Warhawk you do.

Anyway, once we had them all connected it went very smoothly. At one point we had all the PS3’s running Warhawk. We only had 7 people playing Warhawk at once, but it was possible to have a total of 12 people on three PS3’s. We had enough controllers, but not enough people. I like how you can jump in and out of Warhawk on the fly. Great feature, wish more games used it.

But the big hit of the night was surprisingly PAIN! I loaded that up on my PS3 and had a few people try the multiplayer on it. There was 3 modes: Horse, Bowling and a mode where you see how many explosive boxes you can hit. They played that for a couple hours, constantly laughing. It was a great party game! A couple people said they would buy a PS3 just for PAIN, lol.

I tried Rainbow Six Vegas & Call of Duty 4 via LAN. And you can only have one person per screen, which got old quick. But we jumped online with CoD4 and invited the other PS3’s into our party, that was fun! After a while I tried out Rock Band on the 360. I’ve never tried those games before, took some getting used to of course, but very fun. I used to play DDR a lot so the concept was similar. So I picked up on it pretty quick. A couple times in the night the 360 had trouble reading the rock band DVD, had to reset the 360 and clean it off to continue. I’ve never had that issue with the Blu-ray discs, which I like 🙂

Through out the night people tried various demos and PSN games. We started at 5:30 and went until 11:30. It was a fun night.