These are impressions of the single player portion only. I haven’t had a chance to try out the co-op or the Internet multiplayer.

Those who take their stylized fictional violence and action seriously. Any fans of previous Hitman games and fans of violent body-count-heavy action movies. 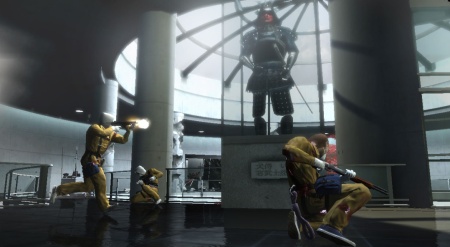 This is a linear, story-centric, action-adventure shooter. There is a very strong spiritual similarity to Hitman. In Hitman, you are a bald hyper-violent killer who goes through elaborate and diverse environments and performs all kinds of creative and spectacular assassinations. In Kane & Lynch you play one of a pair of balding hyper-violent killers who do mostly the same thing. Kane & Lynch has more of a squad based action focus, but it largely feels like an evolution of the Hitman series.

Do you like playing the bad guys? Did you like the movie “Heat”? This title does a superb job of giving the player a variety of stylized criminal scenarios to experience. You get to pull off a bank heist, break colleagues out of prison, kidnap vicitims, raid corporate offices, engage in a gun fight in a crowded night club, and hold all kinds of spectacular shootouts with law enforcement and rival criminal groups. All of these scenarios are done very well and almost every level does something clever and original. 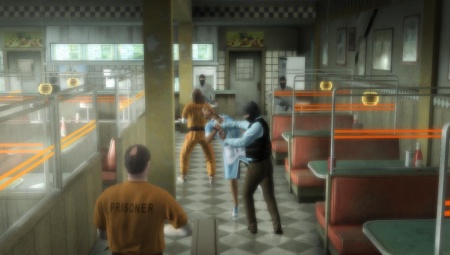 Visuals: While this game excels at the level design and the scenarios, the visuals are merely sufficient for a 2007 title. They get the job done and they are above mediocre but they fail to wow.

Music: The music is surprisingly good. Typically the music to most shooters is very well done but immediately forgettable and not worth mentioning. The music to this title excels beyond that. It’s very clever music that really goes with the game.

Controls: The controls were excellent and play mechanics worked very well. The squad play was well done also. This game added a few clever touches that I haven’t seen in similar games elsewhere.

The story is better than your average game story, but is still an adolescent one. Think ’80s action movies, where the manifestation of one’s manhood is his gun.

The characters lack believability which hurts the overall story. In Kane & Lynch, the main characters basically kill innocent hostages, bystanders, and law enforcement. It is almost impossible to sympathize with this behavior or even see them as believable characters. It’s not the lack of morality that’s the problem, it’s that the characters behind the killing just lack believability and consistency. For example, in the movie Hostel, there is plenty of extreme violence and sadism, but the psychology of the characters seems very realistic once you accept the basic premise of the story. Kane & Lynch lacks that.

While, this game lacks in sustaining a believable fantasy, it has plenty of cool ideas. The characters, the settings, and the plot turns are all very stylish and fun to play along with. 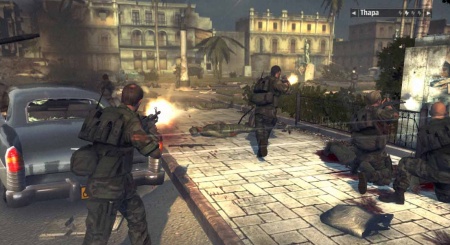 If you want to play out violent criminal fantasies such as bank robbing and breaking colleagues out of jail, this title really nails it. If you are looking for something with less of an angry male premise, you should look elsewhere.

Reaction to Other Reviews

After reading several reviews of this game, I was really expecting this game to be terrible. It’s not. Not even close. This game actually does what it does exceptionally well. This isn’t for everyone, and I hope this write up will be effective in determining whether this title is for you or not.

One last thing. Lynch has long hair. That is not a mullet. A mullet is when you cut the front and the sides and grow the back out. If you grow it long all over (even when you’re balding at top and in front), it’s just long hair. Personally, I think his hair cut looks cool.