This game is old news, and most of you have no interest in hearing about it. But after this game earned the reputation of the biggest trainwreck of the year, I had to rent and see if it was as really as bad as people say. 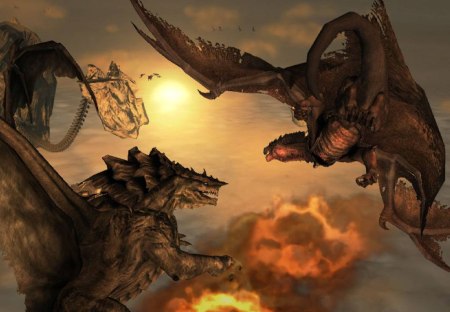 – Great orchestral soundtrack.
– Some great visuals to be seen. Not everything looked great, but a lot of the landscapes really looked nice in this game. I also played on 480i. I’m sure this would look much nicer in 1080p.
– Dragons looked good.
– The core dragon motion control worked surprisingly well.
– Decent frame rate. I heard people claiming there were major frame rate issues. During the parts of the game I played, I didn’t notice any.

– Story and dialog are horrible. Just junk fantasy pulp at it’s worst. I think the same about a lot of games, but with this one, I think almost everyone would agree.
– Most combat was awful. Shooting boats and such was functional if dull, but the dragon melee fighting, the ground combat, and the other miscellaneous play mechanics are all terrible.
– Missions are terrible. This reminds me of other flight games such as Wing Commander or Tie-Fighter from over a decade ago, except this is much cruder.
– Game is short. People make that same complaint about a lot of games, but this game really is short. From glancing at a walkthrough, there are only ten missions. These missions are much smaller and simpler than a standard FPS level.

This game is terrible. If you want to see the trainwreck of 2007, with a few cool tech elements, go ahead and rent. Otherwise, don’t waste your time.

I also hope the Factor 5 dev team can recover from this. They clearly have some talent, but this effort just didn’t work.

Are 50GB Blu-Ray Discs Even Possible?