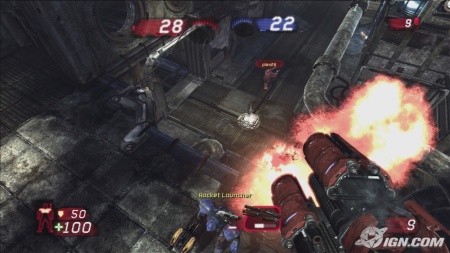 Subjectively speaking, this is the best multiplayer experience on the PS3. I’ve played multiplayer in CoD4, Battlefield 2 (PC), Team Fortress (PC), Counter-Strike (PC), R6:V, Warhawk, and Resistance, and this is easily my favorite.

If you don’t like FPS games, this definitely won’t change your mind. If you are into realistic military settings, the UT3’s generic sci-fi setting can be a turn-off. This game completely lacks a regular campaign. Also, I don’t play vanilla deathmatch, so I can’t comment on that.

However, if you like strategic multiplayer shooters (modes like capture the flag), I can’t recommend this enough. The action is fast, the strategy is perfect, and overall it’s the most balanced, tuned, and perfected multiplayer shooter on the PS3. 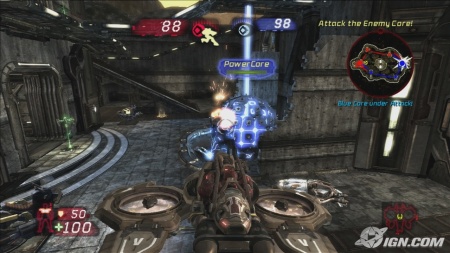 – Keyboard/Mouse Control. The keyboard/mouse supports works flawlessly. Anyone who is used to PC shooters will feel right at home. The PS3 sixaxis works really well too. Game hosts can choose to allow mouse users or not (mouse users have a slight advantage). Navigating all the UT3 menus works great via keyboard as well, so you don’t need to switch back to the controller.
– Vehicles. There is a wide variety of vehicles and they are all very fun to pilot and they are well balanced and integrated into the game. Some of the bigger vehicles require your team to capture and hold a control node for 60 seconds before the vehicle is available which is a nice touch.
– Hover board. The hover-board looked kind of corny in the previews, but in the game, it works really well.
– “Warfare”. This is a team-objective game mode of UT3 (there is also a more traditional capture the flag mode). Without getting into the details, it’s very well designed and implemented; it’s a huge amount of fun.
– Bots. The bots do an excellent job of simulating human opponents. Even playing an offline bot-match is tons of fun.
– User-Created Content. So far, I only tried one mod (some camera mod) which was pretty lame, but I’m excited to see completely custom levels in the future. I’m hoping to see a fraction of the creativity and diversity that was around back in the Doom/Marathon days.
– Polish! I’ve complained there being a lack of new genres in 2007. The advantage of developers staying in the same genre, is that they are able to tune their games, and gamers are able to get such highly polished experiences like this one. When you play this game, all the little details of the game feel right. 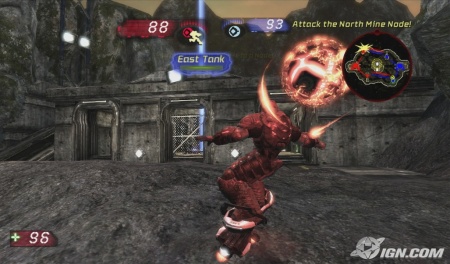 – Overcrowded Genre. As much as I love this game, this is an extremely crowded and generic genre.
– Art styling is bland.
– Techno music is really bland.
– Graphics lack visual dazzle. Technically, the graphics are great. The screenshots look technically excellent and the frame rate is good. But based on the reputation that the developers have from “Gears of War” I was expecting mind blowing eye candy, and UT3 really doesn’t do that. This game excels at gameplay and polish and customization, but not at flash.
– The “thick” look. All player models have necks the size of tree trunks. I think this looks obnoxious. However, this is really only noticeable in cut scenes. During the actual game, the player models look fairly generic, so it’s a very minor nitpick.
– Campaign. There is a single-player campaign, which is basically a linear sequence of bot matches with some atrocious narrative in between. The campaign is really just a practice mode and warm-up for the online play. But even so, they could have done better. The campaign mode should be have emulated that of a sports game or a turn-based strategy game rather than the linear narrative-driven modes of other shooters. Rather than one single “campaign” sequence of pre-configured bot-matches, they should have set up dozens of selectable replayable bot-match campaigns or use a sports-like season structure.