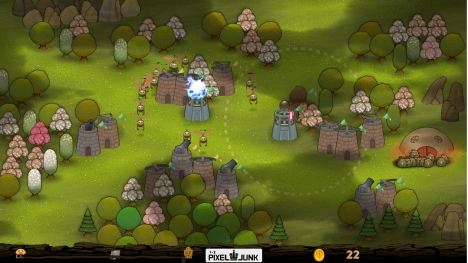 Last night I downloaded the PixelJunk Monster Demo from the Japanese store. It’s actually an english-language game! Supposedly it’ll be available tomorrow in the North American store as well.

The game is like the web-browser game Desktop Tower Defense, but with a few small changes.

You can’t build a tower just anywhere. You have to convert a tree into a tower. This severely limits the game in that you no longer control the path the baddies must take. But I personally didn’t really care about this restriction.

To do anything, you actually have to move your character to do it. To build a tower, you need to move your little guy over to a tree to convert it. That’s not too bad. But when your towers kill off the baddies, you have to collect the gold yourself. That’s a real pain in the butt!

One other change is that you can upgrade towers by paying for it, like the original, or you can also make your character dance in front of the tower for a bit, which comes in handy when you have no moola.

The demo gives a pretty good indication of what the game is like, giving you a tutorial level plus a full level to play around in. It does have two-player co-op, which I’ll try with a friend eventually. If that’s good, I might still end up buying it. If not, then nope.