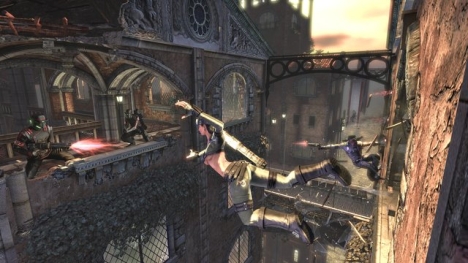 Codemasters is working on a new shooter called Damnation for the PS3 (and PC and 360). They’re doing something different this time around by making the game, well, different. Just looking at the screenshots (follow the link below), you can see how this game isn’t just a cookie-cutter version of all the other shooters out there.

You play as Rourke but appear to be followed around by a female companion who we expect will be co-op controllable, although specific multiplayer options are yet to be detailed.

The Gears of War similarities are immediately apparent from the environments in the first batch of screenshots, as well as the third-person shooter mechanics.

The Prince of Persia similarities come from the ability to explore levels on a vertical axis; hopping around the place or doing stunts to cross impenetrable chasms. Incidentally there will also be over-the-top vehicles like motorbikes that can leap gaps like Morpheus and Tanks that can take bullets like 50 Cent.

I’ll be keeping my eye on this one. While I like a good shooter, I’m getting tired of the same old sci-fi or present-day military themes being used over and over again.