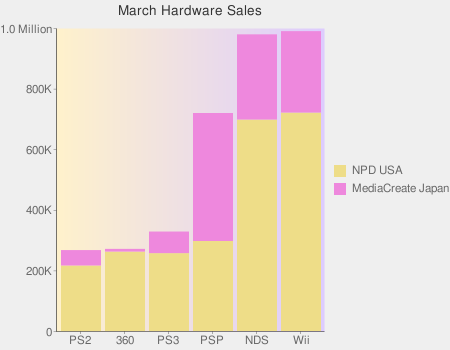 – Above only includes US + Japan figures. I currently can’t get reliable Europe figures which would be very nice to include.

– The 360 managed to eek out a small lead over PS3 in the US NPD numbers this month. Of course, PS3 has a much larger lead in Japan and Europe, so globally, the PS3 is well ahead for the month. It would be nice to see PS3 keep the US lead over 360 in March, but given preliminary vgchartz numbers, it looks like PS3 will take the US lead back for April while keeping large leads in both Europe and Japan.

– First party PS3 titles such as MLB ’08 The Show and Hot Shots Golf didn’t make a splash on the top 10 charts. They could be doing well outside the top 10, and they may sell over a longer stretch of time, but we can’t tell.

– Sony is putting out some really strong software content and firmware updates. I can’t wait to see what happens next.