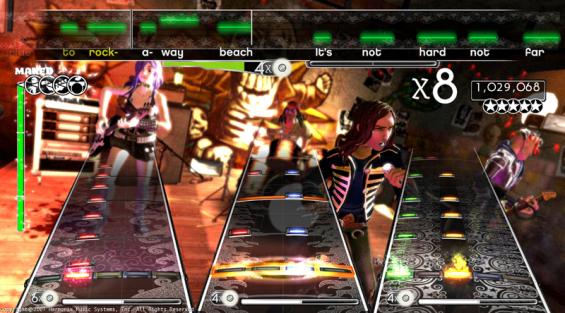 “I’m personally excited to open up the genres of music to country, hip-hop and R&B.”

The limitation with changing genres is the instruments. Hip hop and R&B don’t use much guitar, but they do use piano and most country music doesn’t use drums but does use violins or harmonicas. I’d love to see them move away from the fixed guitar/drum/vocal model and allow for more flexible instrument selections. I’d also hope they allow users to play jazz, classical, techno, and various types of world music.

“With the original ‘Rock Band,’ the focus was on innovation,” Harmonix co-founder and CEO Alex Rigopulos told The Associated Press. “With ‘Rock Band 2,’ the focus is on perfection of the experience. We’ve had a year to listen to our fans and build out the scope, depth and polish of the experience, so it feels like a second-generation band game.”

I’d argue that Rock Band simply fleshed out the concepts of the original Guitar Hero game.

Anyone have any feature requests that they seem to be missing out on?