When one hundred game retailers were randomly sampled with the question, “What video game system should I buy for a 15 year-old boy?”, 64% said 360, and another 18% said either 360 or Wii, and only 16% suggested the PS3. Wow, that’s a very strong preference. 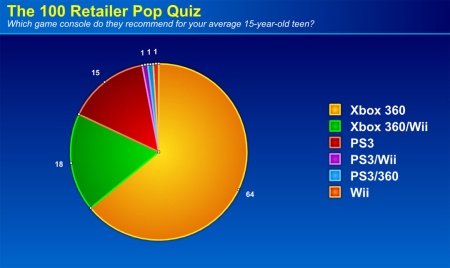 Read the full report at Kotaku.

I’m honestly surprised that retailers perceive such a large difference in game library size. By my own personal count, the PS3 has a much better selection of exclusives in 2008, and the multiplatform titles have all been high quality.

Any theories on why retailers have such a strong 360 preference or why they perceive such a large difference in game selection?

God of War III could be a long game