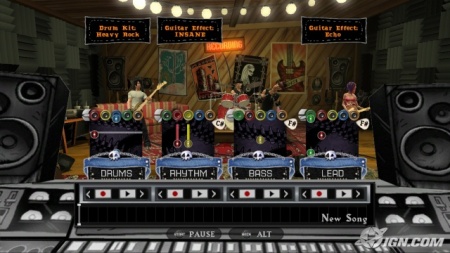 The fabled “new instrument” for Guitar Hero World Tour is actually no instrument at all. Instead, it’s a feature that will let PC users import MIDI tracks into the PS3 and Xbox 360 versions of the game, Neversoft project director Brian Bright has informed Shacknews.

The MIDI sequencer functionality encompasses rhythm guitar, lead guitar, bass, keyboards and drum tracks on the PlayStation 3, but will be limited to drum tracks on the Xbox 360 due to unspecified “hardware issues.” The feature will arrive as part of a week-one patch for the game, which hits October 26 with 86 on-disc songs.

If I’m interpreting this correctly, this allows MIDI-savvy musicians to import any music content into the game’s music creation mode. Nice!