In the Japanese print magazine, Famitsu, Sony revealed their first unannounced game for TGS: Demon Souls. This is a “dark fantasy” action RPG developed by Armored Core developers, From Software. 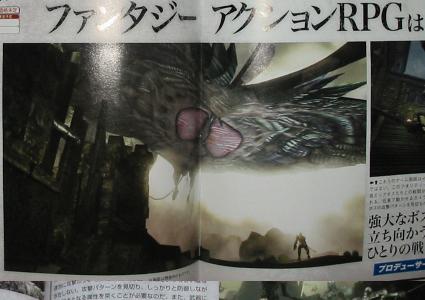 The way Kajii and From Software director Hidetaka Miyazaki described it, Demon’s Souls is a bit of a hybrid — an RPG that uses the PS3’s hardware to the hilt while still retaining the challenge and exploration of traditional role-players. Your hero can use a wide variety of weapons, each of which has different attacks and animations depending on how skillful you are or whether you’re using one hand or two, and the game’s physics system places natural limits on what’s possible in any given tactical situation. “We gave a lot of thought to how to make the fun and charms of a classic RPG interesting all over again with the latest technology at hand,” Miyazaki noted. “We figured that doing the things that previous hardware ignored — having long weapons bump into walls, lighting the area in realtime with the torch in your hand — would make the game that much more fun. We’re taking the things you did through menus in Wizardry and letting you carry them out in real life.”