Games are usually designed around a fundamental challenge of completing objectives, whether it’s defeating enemies, building an empire, or escaping from danger. Great games engross the player in the challenge and get them hooked and poor games usually try to do this, but fail because the challenge feels too repetitive, or too frustrating, or the game just fails to draw them in.

LittleBigPlanet has that core element of challenge as a traditional platforming game but that’s really not what the game is about. The basic platforming elements are generally very easy. Merely beating the levels or getting points isn’t very satisfying by itself. The fun part about this game is discovering all the cool designs, and tricks, and ideas that go into each level. Even with the pre-packaged levels, I’m constantly surprised and amused with what I discover. And, obviously, with the user-created levels, it’s a ton of fun to see all the different concepts that people were able to execute. 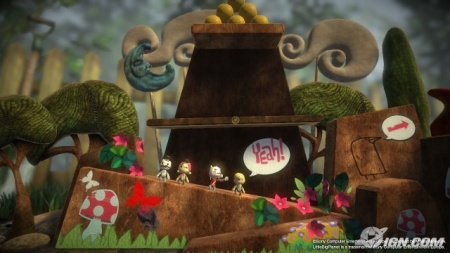 Already, there are a ton of completely entertaining user levels. A good example is a level that someone recreated from the first level of the classic NES game, Super Mario Brothers. The level isn’t challenging and I definitely wouldn’t want to play a whole Mario Brothers game like that, but it was fully entertaining to play the level, and see how many little touches they were able pull off and how they did it. And that level isn’t even close to the best user level I played (Touch of Color is an easy favorite level so far).

The other fun part of this game is using the level editor itself. Most regular players probably won’t take it so far that they are making polished, prize-winning levels, but plenty of people will have a ton of fun making simpler goofy levels and just having a blast while doing it.

Everyone is wondering, will this game be a commercial hit? Will this title unleash tons of entertaining ideas and concepts from the community? Is this title going to start a new a new genre of gaming? No one knows, but this game delivers the most novelty we’ve seen all year and this title is clearly the first to usher in a distinctively new era of user-created game content. 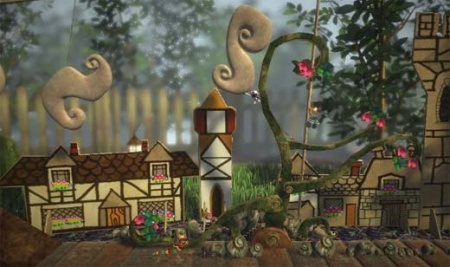 Japan is Hesitant to Adopt PS3/360