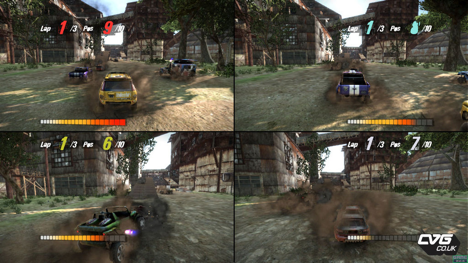 The reviews of MotorStorm: Pacific Rift (MSPR) all suggested to me that it was a good game, but that there was nothing earth-shatteringly new about it. Since I recently bought LittleBigPlanet, and am about to buy Call of Duty 5, I thought I would delay my purchase of this game. But my finances worked out in my favour last week, so I picked up MSPR anyway, and I’d say that the game is a driving success!

Playing the campaign, you first choose a category. Earth, Water, Air, or Fire. Once you do so, you can see a list of all the events that must be completed in the category. You can see which ones you’ve raced, which ones you’ve yet to race, and which ones are locked. There’s also a progress bar across the top, though I’m unsure as to its purpose. (I haven’t read the manual. 🙂 )

In addition to campaign more, Wreckreaction makes a comeback as well. It includes splitscreen, time trial, and quick race modes, in addition to the ability to view the leaderboards. You can add ghosts to time trial races, and you can add bots to others, which is actually pretty cool. Often racing games don’t allow bots when racing four player splitscreen.

I was hesitant about picking up this game right away, but I’m glad I did. This is a really fun game, and the fact that I can play it with my friends is all the more rewarding!