The movie is coming out in May 09 last I saw. But will this be a good Wolverine game? The last one was “Wolverines Revenge” for PS2. It wasn’t bad, I liked the stealth aspect and using Wolverines senses. 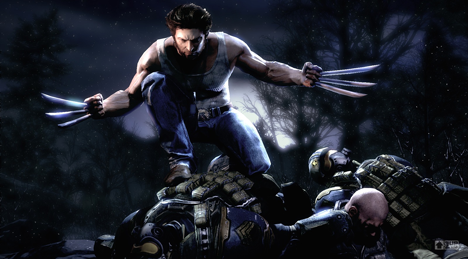 Only info on this game right now is a screen shot. But what I would like to see is more stealth, since he is very good at that when need be, and more brutal gameplay. What I think would be cool is when he gets hurt you can actually see it, and when he heals you can see the progression of it. Then use his claws to destroy the environment in realistic ways and climb up objects with his claws.

I’m a huge Wolverine fan, so I’m hoping this game delivers. I even have my own Wolverine claws, they are a backup pair on the first X-Men movie set, that wasn’t used. Anyway, what do you want to see in a Wolverine game?

Well one of my wishes is granted 🙂

His skills have also been pushed to the limits here, with gameplay enacting lighting-quick combat, evasive maneuvers, in-depth combo attacks, and a whole slew of cool, brutal finishing moves. To top all of that, you get to see Wolverine heal himself, thanks to his mutant regenerative power, right before your eyes in real time.

Will “The Dark Knight” Be Blu-Ray’s Breakthrough?