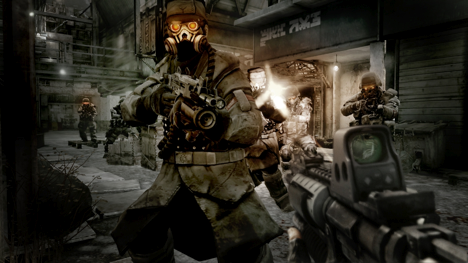 I seem to have brought out the worst in a lot of people with my last post about what I thought of the Killzone 2 demo. So be it. If people are going to react that immaturely to my opinion on something, that’s up to them.

That said, I played the demo some more last night, and I have to say that the menu still annoys me! 🙂

The first time I played the demo, I went with the more CoD-ish control scheme, which I think is Alternate 2. It didn’t work so well. This time around, I went with their Standard scheme, and it works much better. (Duh, I guess.) It’ll take some getting used to, and I still miss crouch as a toggle (notwithstanding what people have said about it not really being a crouch). I also increased the turning speed a bit, and that helped too. My old brain is finally learning to adapt (I turn 40 today).

I spent some time in the warehouse just blowing stuff up. There are barrels and canisters that you can shoot. The barrels explode after just a few shots, but the canisters need more. Sometimes they get a puncture and spin around on the floor for a bit before busting their contents, which is a lot of fun. The explosive effects were great. Some cool flame and smoke effects are very satisfying to see.

There are little touches to the game that I enjoyed that I didn’t notice the first time around. While the melee attack is a bit slow to get into full swing, you can do several melees in a row pretty quickly, which is great. The grenades can be cooked, and you see little lights on the grenade that tell you how cooked they are before you let loose. I also like the yellow arc that shows the path of the grenade. Sometimes if you make a particularly good shot, your AI teammate will say “Great shot!”, which is fun.

This game is definitely slower paced than many other shooters. You have to take your time to find cover, shoot, duck (and heal), and repeat. I died a lot less this time around until I started playing with grenades and blowing things up. Then I died. 🙂 I think that my friend Steve will adapt to this game a lot better than me, because I am more of a run-and-gun type player.

What I am really looking forward to is the multiplayer. The MP beta videos at Gamersyde have really wet my appetite for some squad-based action. Medic? Saboteur? Tactician? I don’t know yet which class I’ll go for, but I’m pretty sure it won’t be Scout. I’m terrible at sniping. Take a look at the videos at Gamersyde and tell me which character classes interest you the most!