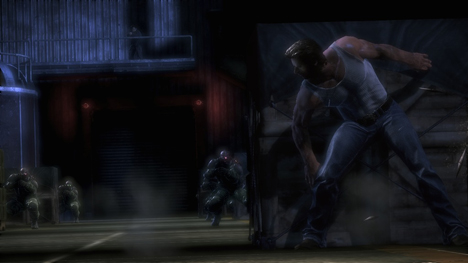 Finally a true Wolverine game. I’m glad they took the more violent, bloody route. It’s how Wolverine is, he’s a killer when need be. If you read the Wolverine comics, you know how violent they are at times.

Imagine this: Wolverine, body riddled with bullets, climbs atop a helicopter. He bursts through the window, grabs the pilot and lifts the body up to the rotors. The pilot’s head gets shredded apart.

Welcome to X-Men Origins: Wolverine. One could talk about the various nuances of its gameplay, but overwhelmingly only one aspect of the game truly stands out: it’s violent. Really, really violent.

It shouldn’t be surprising that X-Men Origins is so bloody. It is, in fact, about a man who has deadly claws coming out of his hands. For too long, the big-budget Hollywood movies and video games have presented a neutered Wolverine. X-Men Origins: Wolverine wants to tell the story of a man who’s very, very angry at those that created him — a weapon of war.

Seems like he will have some killer moves to. Ripping enemies in half, hacking off limbs, etc. And when Wolverine gets injured you’ll see bullets in his body, gashes from knife attacks. It will even show organs and bone before he heals, which happens in real time!

The gameplay will be similar to God of War in some ways. There will be interactive cinematic sequences. But they do it a little bit different:

While GoW has relied on QTE button presses, Wolverine tries to make these sequences feel more like gameplay. For example, when Wolverine fights a helicopter, players won’t have to wait for random buttons to appear on the screen. Rather, they use the same attack buttons to claw away at the windshield. Players have to dodge with the same button as the one in regular combat. Cinematic sequences have their buttons mapped to mirror regular gameplay sequences. It certainly feels a lot more natural than God of War.

I really like their approach at QTE events, sounds like fun 🙂 I’m really looking forward to this game. Hopefully it will be good and not another awful video game movie tie-in. But so far it’s seems to be coming along well.