Is Final Fantasy VII: Advent Children Complete Worth It? 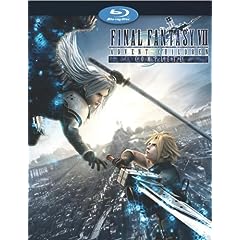 I decided to “upgrade” my copy to the Blu-ray version. Man I’m glad I did, the visual quality is outstanding. Plus the extra scenes (26 minutes worth) really help complete the story actually. Some small details you’ll notice is the characters now get bloody and dirty during the battles. More so during the Sephiroth battle.

So is it worth it? I say yes. It’s only $22.99 right now at Amazon so that’s not bad. It was the 2nd best selling Blu-ray during it’s first week of release in America too.

According to the Nielsen VideoScan BD charts, the film trailed the #1 BD release, Paramount’s Defiance film, by only 14% in sales.

Advent Children Complete reportedly sold over 100,000 copies on its first day in Japan in April, although there were three different versions issued in that country on that day. The original North American and European DVD releases of Advent Children sold 1.4 million copies as the #1 anime DVD release of 2006.

The extras aren’t bad either. They have 2 or 3 videos that give you a brief overview of the actually game. Showing some of the CGI movies and gameplay from FFVII and other titles relating to FFVII as well. I myself got board watching them after a while though. Then an back story of Denzel, which is Anime not CGI, which as good.