Please welcome the newest member of our team

I invited Jay (JimmyMagnum) to officially become part of the PS3Blog.net team and he accepted. Henning started a fun tradition of getting a caricature done for the co-writers and I want to continue it.

Jay started “The Weekly Recap” which is a great feature, I look forward to that every week. Great way to catch up on the weeks events. When I opened the site up to accept new writers again, he was the first to jump on that opportunity. But he’s been commenting on the site since April 2006. Here is his bio. Itâ€™s also listed on the about page. 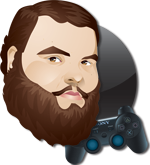 I’ve been a PlayStation fan since I first got my hands on the original system as a kid. Before that, we’ve had a Genesis for years. First PS1 game I had ever played was Jeremy McGrath Supercross ’98, so I hadn’t had it since launch, but I have been a Sony fan since we got it that Christmas.

Back in High School, I was in the newspaper class and wrote a lot of editorials and news articles, so I did have some experience in that department. As far as this blog goes, I’ve been a long time reader. I started visiting back in April of 2006, but I was always posting comments as a guest, since member creation was disabled for a while. At that time, I used different variations of my first name, until I started using JimmyMagnum, my PSN ID, in March 2009.

At the time, this was the site that had the most (useful) PS3 news I could find. It has always been that way, and once they started allowing regular members to start submitting news and all that, I jumped aboard and have been submitting articles since, usually only the stuff I feel are worthy news pieces. I soon got instant posting permissions a little after I started the Weekly Recap, which I have been doing every week since July of 2009.

Because of my writing background, my posts can be quite long, so you might be able to call that a trademark :P. I’m an owner of all 3 major consoles, so I wouldn’t consider myself a fanboy, but some of my views are borderline fanboyism because I have a deep love for Sony’s consoles. My favorite games are ones with a good story, but not too long, so I’m not big on RPG’s. My favorite genres would have to be racing, action and adventure, though, as a lot of my favorite series include God of War, Uncharted, Gran Turismo, Forza Motorsport (XBox) and Metal Gear Solid, but I also enjoy games like LittleBigPlanet and Buzz!