EA have just released a new twin analog game for $9.99 called MicroBot, along with a demo as well. In the game you control a MicroBot that was invented to help the immune system fight infection that was made worse by the previous version of a MicroBot. The Bot goes into a body to kill the bio-technical infection before its too late. The controls of the game are simple as with all twin analog games but the aiming and movement have changed slightly in the game.

Since you are in a body’s blood stream, you get pushed around by the blood making the movement and aiming slightly harder, which makes a nice wee difference between this and other games. Also the guns rotate around the Bot and wont fire till they are facing the way you are aiming which can take a second but with 2 guns attached to the ship there’s always one gun on the go. With this and being pushed around all the time those wee enemies are not always too easy to shoot.

There seems to be a lot of different guns, and attachments to change and upgrade which is always nice, also add a lot of different ways to play the game. The harpoon, which grabs enemies and brings them to you is nice when added with the lancet to impale your enemies. I would certainly recommend picking up the demo and giving it a try. At $9.99 I believe this is a pretty good price with upgradeable weaponry and attachments, nice graphics and a nice change to your average twin stick analog games.

Torchlight Not Coming to PSN 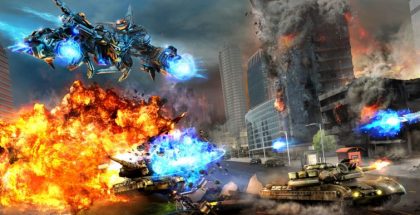