It’s your smarmy internet buddy checking in, FooBear408. I was able to attend the Dragons Age 2 event in San Francisco last night and unbeknown to me, “gift bags” and free stuff abounded and were plentiful for the taking. Now, where I wasn’t able to grab some of the totally awesome stuff, I was able to grab two equally mind-exploding items.. 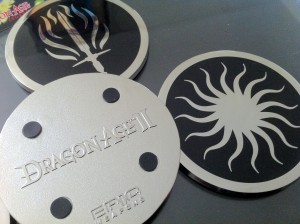 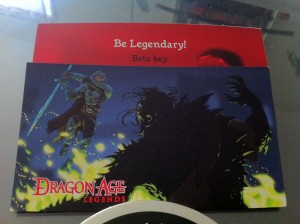 First up to be given away – right here on PS3BLOG.NET – are some pretty cool Dragons Age 2 coasters made out of heavyweight billet aluminum and embossed with four unique symbols directing from the game itself. On the backside of the coaster, it’s stamped with the official DA2 logo. Trust me when i tell you loyal minion, these coasters are super nice! I was able to get four of these hard to get coasters, to be given away to two lucky recipients…

Next up? Five exclusive BETA keys into the the very exclusive “Dragons Age: Legends” social game being tested on Facebook right now! Mr. Silverman himself gave me these BETA keys  “to be given to our best fans” and i just nodded and smiled. These BETA keys are quite special, because when you play the DA:Legends – you have the ability to unlock real in-game weapons for Dragons Age 2 – awesome!! Not only that but you’ll be able to play DA:Legends weeks before anyone else on Facebook, so you’ll have a nice little head start on the fierce competition.

I consulted with the PS3BLOG.NET overlord, aka “Tosh” and we came up with a great idea as far the giveaway…

The prize packs will be as follows:

Good luck to all, these items are super cool!