It’s been a long time coming and now it’s finally official. The last step was getting caricatures complete for both of them. Both of these guys have helped a lot in the past years. Be it giveaways or managing our twitter/facebook in addition to all the reviews and posts they have done.

Both arrived first in the forum I believe. When Oly arrived, he was already giving away things. It was a Uncharted 2 Multiplayer Navarro Skin. When Luke arrived he mentioned he bought some games from our PS3Blog.net Store to help out.

So please welcome them both to the Official PS3Blog.net Team! Bios after the jump!

Bio’s are also listed on our redesigned about us page. Check it out!
Oly â€“ Contributing Editor 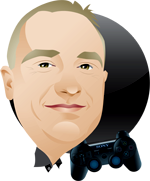 Hiya, I’m Oly. I am a 36 yo Chiropractor in San Diego, CA. Iâ€™ve been married for 14 years to a very understanding and loving wife. I am also a father of 1 boy age 13, and three girls ages 12, 8, and 3. I am an avid collector of comics, as well as action figures. I also seem to be collecting PS3 games these days. I have practiced martial arts all my life, and hold a black belt in Kali and Escrima, and have a purple belt in Brazilian Jiu Jitsu. I have also studied many other styles.

I have been playing video games for as long as I can remember, first playing Pong on a little black and white TV. I also spent many hours playing text based games like Zork back in the day. I have owned nearly all the gaming consoles ever released, with the exception of the Xbox consoles, however I consider myself a true PlayStation fanboy these days. It’s hard to choose a favorite game for me because I play and like so many different ones, although my favorite genres would have to be action/adventure, FPS games, RPG, and any co-op or multiplayer game I can spend time playing with my family. 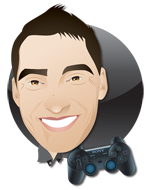 Iâ€™m Luke, I heart video games. I started playing them when I was around 5 years old on a machine that well used cassette tapes. Can you tell weâ€™ve come a long way? Anyways back in â€™89 I moved to the States and got introduced to the Nintendo, oh Mario how I miss thee. Soon after it was the SNES, Commodore 64, Genesis, Sega CD and what have you. I finally jumped ship and left the console industry forever or so I thought.

As I started getting older I started building my own computers, which helped me in playing the latest and greatest. One day I met a person online which has remained one of my best friends to this day. We worked on a fan site which he created called Commandos: The Fortress. Back then it was all about the Commandos games for us. We then created a gaming website called GameMarshal, went to E3 a few times and hung out with the big dogs WOOF WOOF! Unfortunately this didnâ€™t have a happy ending, the both of us took on too much for just two users and we finally decided to give up. We shut the website down and that kind of killed gaming for me. I no longer really had a passion for gaming, not sure what it was but I just lost interest. I played a game here and there but that was about the extent of it for the next 7 years.

Then all of a sudden something magical happened, I saw Rock Band 2, on the console that should remain namelessâ€¦ 6 months later I was thinking of getting that console when a friend told me to get the PS3. I guess he just wanted that lets hold hands together on this new journey kind of feeling. Where is the rest you ask? Well the rest is all history, time for a new beginning!