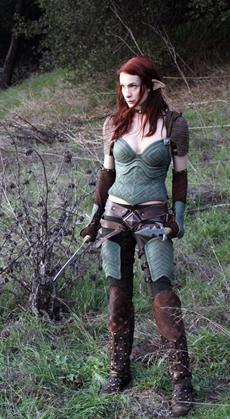 BioWare and EA have announced a new six-part web series called Dragon Age: Redemption, created by, and staring Felicia Day. Felicia Day is an actress that has had many guest appearances in TV shows, such as House, Lie to Me, Dollhouse, and Monk, although she is best known for her reoccurring character in Buffy the Vampire Slayer, and more recently the web series The Guild, for which she is the creator, writer, producer and star.

“I’m a huge Dragon Age fan, and I have been looking for a follow up project to ‘The Guild’ for quite some time,” said Day. “I was thrilled when the opportunity to work with BioWare materialized. Dragon Age: Redemption allows me to tell a fantasy story in a new way, using a universe I really love. It has been a dream working together.”

In Dragon Age: Redemption, Day stars as Tallis, an Elven assassin hired by the Qunari to capture a rogue mage intent on wreaking havoc throughout the world. In her quest to find this dangerous mage, Tallis is joined by other companions who are not always aligned in their beliefs and goals, but who band together to defeat their foe, in an attempt to restore peace and balance to this dark fantasy universe.

Day’s original web series, “The Guild,” which follows the story of a group of players in a fictitious MMORPG, was an instant internet phenomenon, attracting more than 100 million viewers in three years. Day is also known as the main love interest, Penny, in Joss Whedon’s Dr. Horrible’s Sing-Along Blog, and for her recurring role as Vi on Buffy the Vampire Slayer. For more information about Felicia, including updates on Dragon Age: Redemption, please follow her on Twitter at http://twitter.com/feliciaday/.