This Week on PS3 February 22nd

We have a lot of goodies hitting this upcoming week and I hope your wallets are ready! See all the releases after the jump. 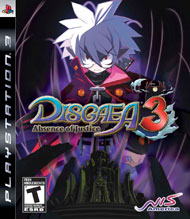 Disgaea 3: Absence of Justice by NIS America $34.99 What a deal!
Product Details:

With high-definition graphics, including beautiful high-res 2D sprite art and stunning spell effects, one of the most highly-acclaimed and beloved strategy RPG series is making the jump to the next generation of gaming with Disgaea 3: Absence of Justice for PLAYSTATIONÂ®3. Re-enter the world of Disgaea and experience all of the humor, zany characters, thrilling action, and unmatched excitement in this all-new 100+ hour adventure! 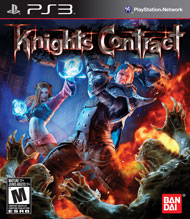 Take a journey through a medieval world of swordsmen and magic, where witches have been hunted and brutally exterminated. Knights Contract follows the twisted tale of Heinrich, an immortal executioner, and Gretchen, a resurrected witch. Once the victim of Heinrich’s blade by the order of the game’s antagonist, Dr. Faust, Gretchen now has him by her side and the two must work together to rid the land of the supernatural foes who are cursing its people with the black spell of death.

* Sword & Sorcery – Combine Heinrich’s razor sharp scythe and Gretchen’s explosive witchcraft in battle to devastate enemies with fluid, fast-paced combinations to ultimately return civility to the land
* A guardian knight – As the Immortal executioner, players must team up with and protect Gretchen against hideous creatures and unspeakable evil as her magical prowess and mortality are the key to the duo’s survival
* An unlikely duo – Heinrich, an executioner loyal to the law, was made to kill the witch Gretchen, who in her final moments cursed him with immortal life. Gretchen has been mysteriously resurrected and Heinrich, under contract, now fights alongside her as her guardian
* Medieval style – Explore a beautifully recreated 17th century Europe amidst the lore of witches and magic where people are crippled by fear and wide-spread panic runs rampant 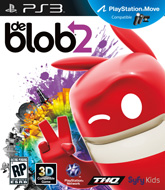 In de Blob 2 Comrade Black and the Inkies are back with a whole new plot to rid the world of color. With all new help from Papa Blanc and his flock of followers the Blancs, Blob and his friends will have their work cut out for them bringing color back to the citizens of Prisma City. Set off on an action-packed color adventure where custom paints, patterns and music bring the world to life. de Blob 2 is a creative evolution driven by your imagination!

* Imagine. Set off on an action packed color adventure with 12 new single player story levels where custom paints, patterns and music bring the world to life any way you want.
* Laugh. Only the colorful prankster Blob can foil Papa Blanc’s evil hypno plot to steal all the color from Prisma City.
* Power. Speed smash through walls, jet jump over skyscrapers and slam squash Inky’s with all new power-ups that turn you into a super Blob.
* Explore. Paint your way past icy outposts, tropical bio domes and distant space stations to free the fair citizens of Prisma City.
* Transform. Inside, outside, above the Earth and below it, Blob embarks on mini missions and epic boss battles to restore color and music back to this rich universe.
* Share. Recruit your friends to join the color evolution in all new co-operative multiplayer modes. 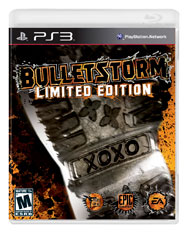 BulletStorm Limited Edition by Electronic Arts $59.99 this is adding up!
Product Details:

Set in a futuristic utopia, an elite peacekeeping force thwarts the rumblings of civil war. But deception within the ranks has caused two members of the most feared unit to strike out on their own. Now stranded on an abandoned paradise, Grayson Hunt and Ishi Sato find themselves surrounded by hordes of mutants and flesh eating gangs. They survive on two objectives: get off the planet alive and extract revenge on the man who sent them there. As Grayson Hunt, players wield an arsenal of over-the-top combat moves and outrageously large guns that feed into Bulletstorm’s distinct skillshot’ system producing unprecedented levels of frantic gameplay and yell-inducing satisfaction.

* Authentic Helghast Helmet replica opens to reveal art book, Super Voucher and Killzone 3 game.
* Exclusive Cloaking Helghast Marksman action figure is 6.5″ tall with multiple articulation points and will not be sold at retail
* Includes bonus video content giving you a behind-the-scenes look at the making of the game.
* Exclusive art book featuring imagery from the Killzone universe
* Super Voucher includes – Killzone 3 soundtrack & PS3 dynamic theme – Retro Map Pack featuring two of the most popular maps from Killzone 2 – Double XP for the first 24 hours of multiplayer gameplay – Full access to all weapons and abilities for the first 24 hours of multiplayer gameplay 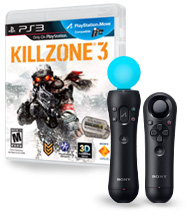 Visari is gone, but the war is far from over. Helghast forces have mounted a devastating counter-attack, prompting the ISA evacuation of planet Helghan. As new Helghast battalions appear with more powerful weapons, ISA forces find themselves outmanned, outgunned and surrounded.

* Epic single player campaign with a gripping storyline and intense action
* Battle your way through huge, diverse environments from alien jungles to harsh arctic vistas shown in incredible graphic detail
* Face off against new, relentless Helghast enemies armed with more powerful weapons and abilities
* Full 3D compatibility takes immersion to new heights, delivering a “boots-on-the-ground” experience like no other
* Award-winning multiplayer mode returns, with more innovative game modes and better ways to enjoy the game with your friends
* New brutal melee system lets you get “up close and personal” with Helghast enemies for even more intense combat
* To get early access to the beta, look for the SOCOM 4 callout on the front of all specially marked copies of Killzone 3. Inside the box you’ll find a PSN code that you’ll be able to redeem for your early access as soon as the beta goes live
* Increased vehicle gameplay, including aerial combat action with ISA Intruders and jet packs

The official PlayStationÂ®Move sharp shooter attachment houses the motion controller and navigation controller to provide the most intuitive and immersive control experience for shooter games. Its authentic design and precision ensure the most engaging gameplay experience. The design includes easily accessible buttons, digital trigger, adjustable shoulder stock and convenient access to the navigation controller. In addition, the sharp shooter has incorporated a firing mode selector, pump-action grip and reload button that allow for new ways of engagement*. The sharp shooter is perfect for PlayStationÂ®Move owners who want to experience the most realistic action possible.

Play with confidence with the official controller for the PS3 system. The Jungle Green DualShockÂ®3 wireless controller is the newest addition to the exciting line up of colors, and provides motion-sensing technology, vibration support, and a comfortable grip for hours of gameplay. Additionally, the DualShockÂ®3’s Bluetooth technology allows up to seven individuals to play together wirelessly.

* Play with confidence with the official controller for the PS3 system.
* Newest color addition to the DualShockÂ®3 wireless controller line up
* Ergonomic shape allows for hours of comfortable game play
* Feel hits, crashes, and explosions with vibration feedback
* Inclusion of SIXAXIS motion sensing technology
* BluetoothÂ® technology for wireless gaming
* Up to seven players can play wirelessly together 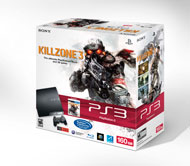 PlayStationÂ®3 is the only gaming machine that delivers a complete high-definition entertainment system with a built-in Blu-ray player, hard drive, Wi-Fi, and full range multi-media capabilities.

Visari is gone, but the war is far from over. Helghast forces have mounted a devastating counter-attack, prompting the ISA evacuation of planet Helghan. As new Helghast battalions appear, armed with more powerful weapons, ISA forces find themselves outmanned, outgunned and surrounded. 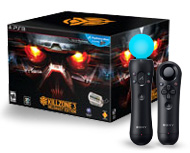 We also have the strategy guides releasing and the standard edition of Killzone 3 for $59.99 and each guide at $19.99.I wanted to state the obvious here, each Move bundle doesnt include the camera! Someone dropped the ball there. So if you are indeed getting one and dont have the camera you will need to pick one up. Ill be busy counting my change and cleaning my car out for some cash in the meantime.