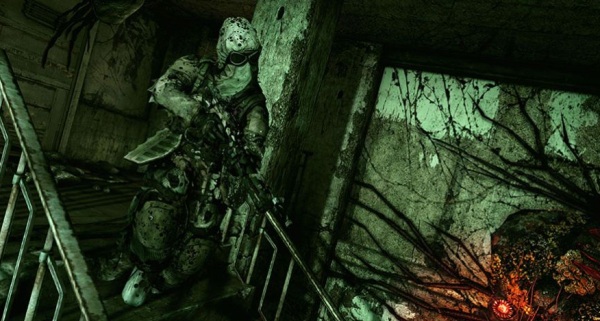 Guerilla Games definitely has some high end art talent. I don’t think I’ve ever seen such stylish gas masks, hooded sniper cloaks, or helghast captain costumes. (On the downside, why do the ISA look so generic?)

Secondly, Guerilla must employ the top technical effects wizards; every scene is saturated with the most absurdly gratuitous use of mesmerizingly awesome particle and lighting effects: swirling fogs, floating embers, and exotic lighting make every scene visually addicting to watch.

I’ve seen a handful of 3D games already, so the core effect has lots its shock novelty. But combine that with the dramatic visuals and particle effects mentioned above along with the expert application of 3D to HUD elements and scoped weapon use, and the result is mind meltingly awesome.

During this console generation we’ve seen a lot of visual improvements; the move to HD, a twenty-fold increase in geometric detail and texture and shader quality, etc, but I think this tops my list of eye popping moments.

(Next up: Sharp Shooter Control Impressions)

Crysis 2 Gameplay on PS3 with a “Demo Coming Soon” Announced