MLB 11: The Show Co-op Detailed and Demo Out Now 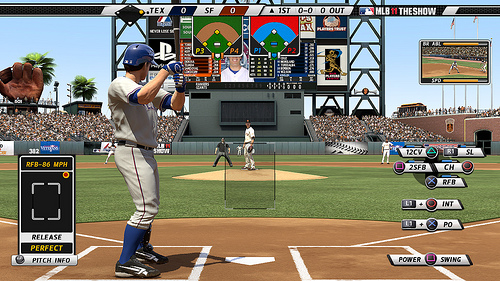 The “MLB The Show 2011” demo is now out and ready on PSN to be downloaded and yelled at. I was extremely impressed with the demo and it was everything I expected and a lot more. The difficulty is what had me hooked the moment I began playing. I was able to hit the ball two times in a total of 8 innings over two run throughs.. This isn’t your average press the button and knock the ball out of the park game by any means. The dual analogue controls will take awhile to get used to. I advise you to take a play on it if you are even remotely interested and make your own judgment. The co-op although not featured in the demo is another one of The Show’s big selling points. Eddy Cram, Senior Designer stopped by the official Sony Blog to share the goods on what to expect.

One of the features that many of you have been pushing for is the desire to play The Show with someone as a teammate, instead of just as an opponent. So, this year we created a co-op mode that gives you and a buddy the ability to play on the same team against the CPU, against 1 player, or against 2 other players. 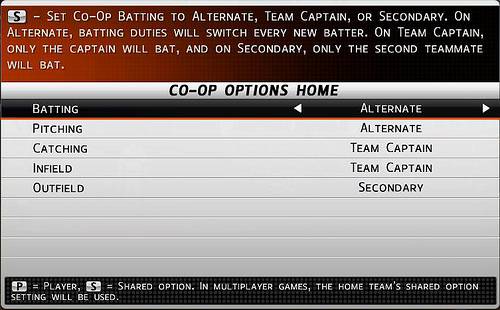 Hereâ€™s how it worksâ€¦youâ€™re able to customize who will be responsible for the different offensive and defensive areas of the game. When youâ€™re at bat, you can choose to allow one person to do all of the batting or choose to alternate batters. The base running works in the opposite way so if youâ€™re batting, your teammate will be responsible for the base running allowing you to work together for sacrifices and hit and runs. I promise you, if youâ€™re playing a 2v2 co-op offline, youâ€™ll start to develop hand signals with your teammate for these situations. I know, that sounds ridiculous, but itâ€™s going to happen.

When youâ€™re in the field, there are four different controllable areasâ€”pitcher, catcher, infield, and outfield. Again, you have the ability to customize who is responsible for different areas. The pitcher, like the batter, can alternate between the teammates (per inning). 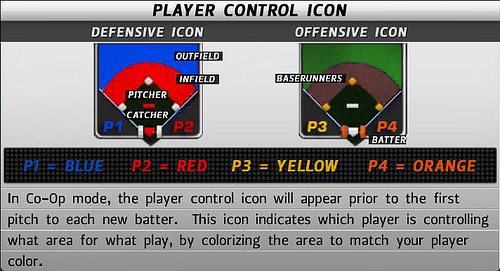 To help avoid the confusion of who is doing what, we created some graphics that use your playerâ€™s color to indicate what responsibilities you have at any given moment. Youâ€™ll see the description as you load into a co-op game, and the dynamic icons will drop down from the score bar at the beginning of each at bat.

Co-op is also available online allowing two systems and four players maximum (two users per team) to play a head-to-head game. The PlayStation Network user logged in will receive the game stats and points on their profile. The other user is their copilot, so to speak. Users can also play an unranked co-op gameâ€”two users, on two different systems, on the same team, versus the CPU.

There is still much that has not been said. There is no input on whether Franchise mode is available with a friend. This might be a deal breaker for some and is something to keep in mind.