Not so busy this week, we still got at least one title people will be enthused about. Here they are: 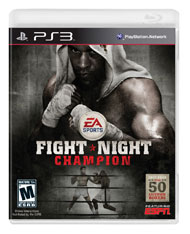 More than just a change to the franchise name, Fight Night Champion takes the boxing experience one giant step forward by delivering an experience never before seen in an EA SPORTS video game. History will be made with this revolutionary iteration that builds upon the best-in-class gameplay and physics engine of Fight Night Round 4, while immersing you in a world of brutality, uncertainty, betrayal, and redemption. Survive the brutal road to redemption with Fight Night Champion.

* Full Spectrum Punch Control – Control your boxer’s punches with precision and accuracy like never before with a new synergy of gameplay controls. From overhand punches to strategic counter jabs and one-punch knockouts, overwhelm your opponents with your refined skill set.
* Physics-Based Gameplay – Move around the ring and time your attacks with precision. Building off the best-in-class gameplay engine featured in Fight Night Round 4, you now have an even wider range of abilities when it comes to counterattacks, setting up combos, and attacking your opponent.
* Legacy Mode – Create your alter ego and put him in the ring against past champions. Work your way up the ranks through training and scheduled bouts, and establish your name as the fighter to beat. Take your boxer online and see how you size up against the best in the world competing for local or worldwide belts in the all-new Fight Night Nation.
* Authentic Content – Fight Night Champion showcases the truest graphical representation of the sport, lifestyle, and culture of boxing with authentic and dynamic blood, realistic body damage and deformation, and mature content throughout. Experience the violence and brutality that is true to the trade.
There is a demo for this on PSN if you did not already know. 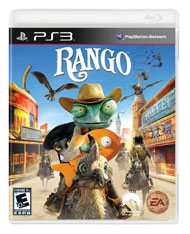 Rango is an action/adventure game set in a gritty, pint-sized, Wild West world filled with off-color characters, wild rides and frantic shoot-outs. Players of all ages will meet the residents of the town of Dirt and play through Rango’s whacky Tall Tales of Adventure, brimming with intense action and outlandish scenarios. Having saved Dirt from drought, players will be challenged to maintain Rango’s reputation as Sheriff and embark on his wacky adventures, performing dizzying feats of heroism as he spins spectacular and awe-inspiring stories for his fellow Dirtonians. Players will explore a variety of environments featured within and beyond the film, and must achieve near impossible feats as they work to uncover a sinister alien plot that threatens to abduct the entire population of Dirt. Along the way, Rango will encounter all the trappings of an adventure set in the Old West – ridin’, jumpin’, brawlin’, and shootin’ – that are crafted from the film’s pint-sized desert scene. Rango the Video Game will feature awe-inspiring gameplay sequences; authentic characters and intense action coupled with outlandish scenarios which are sure to encourage the wild imagination of all Rango fans.

* Trophies / Achievements – Pull off near-impossible feats to earn Trophies / Achievements that are all throughout the Wild West town of Dirt.
* Ride Roadrunners and Desert Bats – Speed through the desert atop these unconventional chariots as you perform extraordinary acrobatic chases.
* Golden Bullet – Hone your sheriff shooting skills in unique golden bullet sequences that promise to impress your Dirtonian admirers.
* Wild West Shootouts – Face hordes of hostile rodents as you show the town who’s boss in good, old-fashioned shootouts where guns are blazin’ and spurs are shinin.’
* Meet the Dirtonians – From a group of mariachi birds who provide color commentary to a gang of wild rabbits, your fellow townsfolk will provide no shortage of fun and entertainment. 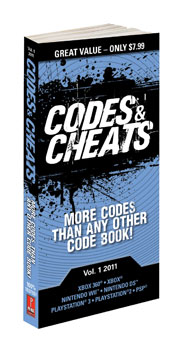 * More codes than any other codebook.
* Includes cheats and unlockables for thousands of the most popular current and next-gen games!
* Find every code on your favorite platforms like the Xbox 360, PS3, Wii, and much more!
* Travel size with a very affordable price!

SOCOM 4 Full Deployment Details, this you might wanna read!