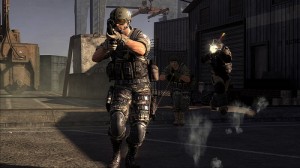 We have some SOCOM 4 Beta codes for PS3Blog.net members to give away! The Socom 4 Codes go into effect on March 29th, and will allow you to participate in all four game modes (spanning two maps).

You can donate 100 points to username “Lottery” once a day (to further increase your chances, don’t miss a day). Tosh and Oly have also pitched in some codes, allowing for multiple winners. Entry date ends at 11:59:59 PM, March 17th, Arizona time. Further details of the beta after the jump.

Competitive multiplayer has always been the core of the SOCOM franchise, and SOCOM 4: U.S. Navy SEALs takes it further than ever before with modes and options that both new recruits and veterans alike will enjoy. We’ve previously covered three of our four competitive modes — Suppression, Last Defense and Uplink — and today we’re excited to unveil our fourth mode, Bomb Squad.

In Bomb Squad, Insurgents have planted a number of bombs around the map and the Spec Ops team must defuse them all before time runs out. What makes Bomb Squad special is that it features the unique Bomb Technician character, played by one member of the Spec Ops team, who is charged with defusing the explosives. He carries both an automatic shotgun and a mobile grenade launcher and is very heavily armored, making him a deadly force on his own; that said, the technician is still an open target any time he turns his back to defuse Insurgent bombs. Succeeding in Bomb Squad requires tactics, teamwork, patience and confidence to get the job done, all pillars of the overall SOCOM experience.

Sony Factories Shut Down Due to Earthquake