Looks like there is a lot this week. I hope you have some money saved! On with the goodies. 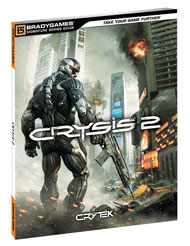 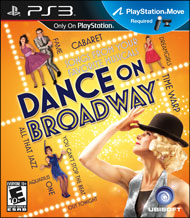 Dance on Broadway by UbiSoft $39.99 You know you want it!

Coming to the PS3 system, “Dance on Broadway” a musical game that puts you center stage, performing the very best of Broadway right in your living room. Dance, sing and perform 25 Broadway-style choreographies from over 20 of the most beloved shows, including Fame, Billy Elliot, and Chicago. Take on your favorite Broadway roles, or cast your friends and family in fun duets.

* Perform 25 Broadway-style choreographies from over 20 of the most beloved shows, like Chicago, Billy Elliot, Rent and Fame.
* Play Star Mode and become a Broadway legend as you follow along with on screen lyrics and perform with supporting characters
* Perform in the Critic’s Challenge alone or with a friend to unlock new songs and save your local theater
* Play in Party Mode with a friend and use the Playstation Move controller to earn the highest score for each song and become Broadway’s hottest star!

Experience the magic of Broadway:

* Relive the feeling of real Broadway productions with large dance ensembles, a variety of unique characters and costumes, and dynamic sets and stage lighting. 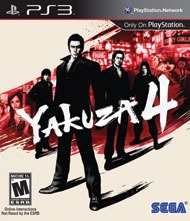 Yakuza 4 recreates the real underground world of Tokyo and lets you thrive in an intensely deep crime action game where four men cross paths over a woman and dead man. 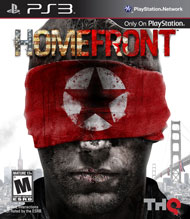 The year is 2027. The world as we know it is unraveling after fifteen years of economic meltdown and widespread global conflict over dwindling natural resources. A once proud America has fallen, her infrastructure shattered and military in disarray. Crippled by a devastating EMP strike, the USA is powerless to resist the ever expanding occupation of a savage, nuclear armed Greater Korean Republic. Abandoned by her former allies, the United States is a bleak landscape of walled towns and abandoned suburbs. This is a police state where high school stadiums have become detention centers, and shopping malls shelter armored attack vehicles. A once-free people are now prisoners… or collaborators… or revolutionaries. Join the Resistance, stand united and fight for freedom against an overwhelming military force in Homefront’s gripping single player campaign penned by John Milius (Apocalypse Now, Red Dawn). Stand alongside a cast of memorable characters as an emotional plot unfolds in this terrifyingly plausible near-future world. Experience visceral, cinematic first-person shooter action as you fight your way across Occupied USA using guerrilla tactics, and commandeer military vehicles and advanced drone technology to defeat the enemy. Multiplayer brings epic warfare to the online arena as infantry, tanks, attack helicopters and combat drones battle across huge, open battlefields. A rich feature set offering layers of tactical depth combined with a game-changing innovation in the multiplayer space will set a new benchmark in online warfare.

* Discover a terrifyingly plausible near-future world – the familiar has become alien in this nightmare vision of Occupied USA
* Fight for a cause – join a cast of memorable characters as your resistance cell wages a guerrilla war against overwhelming military odds in the name of Freedom
* Witness the human cost of war – a gripping story from the pen of John Milius is told through immersive, interactive 1st person cut scenes
* Experience explosive FPS gameplay – battle through a dynamic mix of infantry and vehicle combat in a gripping single player campaign boasting intense, memorable set pieces
* Take the battle online – experience large scale multiplayer action like never before in epic infantry and vehicle warfare 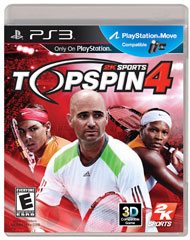 The latest iteration from the best-selling, next-gen tennis simulation video game franchise*, Top Spin 4 introduces a bold new take on the sport of tennis allowing you to experience firsthand all of the intensity, emotion, and excitement of a real life tennis match. Feel the adrenaline pumping through your veins as the crowd falls completely silent in anticipation of a break point serve. Your hands are sweating. Your heartbeat is racing. The ball is served ferociously and now coming at you at 125 mph. Intensely focused, you crush your return for a baseline winner as the sold out crowd erupts in a roar. With all-new unbelievably responsive controls, electrifying stadium atmospheres, enhanced TV style presentation elements, incredibly accurate player models with Signature, and a super deep career mode, Top Spin 4 is so real you have experience it to believe it.

* REAL Tennis- From the life-like visuals of the world’s best players, to the recreation of the world’s most hallowed courts and the unparalleled authenticity of the on-court gameplay, Top Spin 4 provides a breathtaking tennis experience. When your player moves, watch their shadow move with them. As you rally with an opponent in a crucial point, listen as the crowd builds with intensity. Experience everything the pros do in a real tennis match.
* ALL-NEW Intuitive Controls – Totally re-engineered from the ground up, all-new gameplay controls provide for an unbelievably responsive and satisfying experience allowing you to target your opponent’s weaknesses & dominate the court at any skill level.
* The Deepest Player Roster Ever – Experience the best collection of tennis talent ever assembled as you now have the option to play with 25 of the world’s top pros, dozens of talented up-and-comers and some of the game’s most iconic legends.
* My Player Mode – Create and customize every aspect of your created player as you develop your own style of play to dominate the field on your way to becoming #1 on the World Tour. 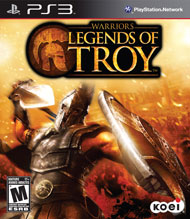 In Warriors: Legends of Troy, two great armies clash not over home and country, but for the love of a single woman. The fates of these civilizations now stand upon the razor’s edge. 3000 years ago, a poet sang of heroes strong enough to stand alone against an army. For love, they sailed the world. For family, they made the greatest sacrifices. For honor, they stood and faced the will of gods, And fought a war which shook the earth. In the age when Zeus Almighty ruled over immortals and men, what begins as a truce between two cities quickly erupts into a massive war that will shake the very foundations of Olympus.

* The Greatest Heroes: Fight for the Trojans and the Greeks as you experience the war from the perspectives of the greatest heroes .
* Epic Battlefields: Clash with legions of soldiers on glorious battlegrounds that reach for miles throughout the ancient world.
* Strategic Carnage: Do anything to survive. Grab a sword from a fallen enemy and hurl it at a soldier bearing down on you. Smash an opponent with your shield, and then run your spear through him. Or just throttle them with your bare hands.
* Legendary Battles: Battle larger-than-life heroes and even confront mythical creatures sent by the gods themselves.
* Brutal History: Among the inspirations for the game are The Iliad, Homer’s epic poem from the 9th century BC, and in-depth research of the ancient battlefields of the Trojan War.
* Ancient Heroes: Play as infamous heroes such as Achillies and Odysseus from Greece, as well as Hektor and Paris from Troy. 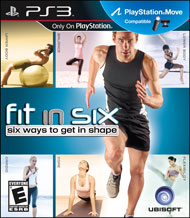 No description available. Call it what it is, another wii port of an exercising game..

So what will you be picking up this week? Troy is looking to be Dynasty warriors all over again and that is not a bad thing. Top spin demo was great but at $59.99 I feel it was priced to high.