Edge and Schick have DLC for inFAMOUS 2 and more 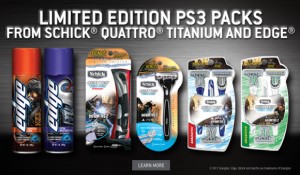 Need to shave? Might as well get one of the unique PS3 themed kits and score some DLC. How about the Infamous 2 Sniping ability? The Chevy Camaro for GT5 perhaps? Edge and Schick have teamed up with Sony and Jt Pierce Marketing manager had this to say about the announcement:

Some of the biggest franchises ever to hit PlayStation have had caused quite a buzz over the last few months. Gran Turismo 5 and Killzone 3 are both runaway successes. And with anticipation building for inFAMOUS 2, weâ€™ve been hard at work looking for ways to help up the ante in your AAA action.

Thatâ€™s why weâ€™ve joined forces with Edge and Schick to help you get more of an edge in your life and your gameplay. This week, special edition Edge Shave Gel and Schick Quatro products are hitting store shelves nationwide. These custom Killzone 3, Gran Turismo 5 and inFAMOUS 2 packages are more than just collectorâ€™s items. Enter the on-pack code at edgeshave.com/ps3 and get your hands on your choice of downloadable content including:

* A Killzone 3 Retro Map Pack featuring two popular maps from Killzone 2 OR three Unlock Points to use on the weapon or ability of your choice
* A customized Chevy Camaro SS â€œEdge Specialâ€ for Gran Turismo 5
* A special â€œSniper Blastâ€ in-game power for inFAMOUS 2. The long-range blast has a narrow area of effect to better equip you to take-on the enemy when inFAMOUS 2 arrives in June.

Yakuza 4 is out and on sale