When I was at PAX East 2011, I got a chance to see brand new footage of Deus Ex: Human Revolution with several thousand other people. The only problem with that was that we weren’t allowed to capture it. I can totally understand why Eidos Montreal thought that was for the best. After all, the footage was from a build that was several months old, but after seeing what I saw, I was really impressed.

Honestly, I don’t see how that footage could have hurt the game; it was everything it should have been. To start things off, watch the video below. It gives you a look at what we saw, but does cut it short, since once the main hero entered the building, we got to see more of the action.

Now, this video gives you several things that we were never shown; at least, not in the beginning. For one, it gives you a look into the several different ways you can handle a situation. One way is to simply surprise someone and kill them with your blades, or you could just sneak up on them and give them a little hand to knee combat. Eidos Monteal would like to call the second take down “non-lethal”, but at this point, I am not sure what’s worse: getting stabbed in the ribs and in my jugular, or getting punched in the face by a robotic arm. Do keep in mind that in no way am I complaining; both ways look extremely cool, as long as it’s not happening to me.

When we were watching the very first scene, the player moved in on the enemy and choked him out without killing him. We were told that this would leave the guard unconscious for the remaining part of that level, unless a fellow guard saw him and woke him up. This is why it is very important to hide the bodies of the fallen enemies; unless you just want to kill them and don’t care who comes looking for you.

The next thing we saw was the hero move a box around so that he can climb onto other crates and sneak into the building from above; this is the part where you see the electricity. Notice that when you take damage, your health does regenerate but it doesn’t happen immediately. This was put in place so that you can concentrate on gameplay and not on searching for health packs (although different things are available throughout the levels to help you with health if you come across a sticky situation).

Also, keep in mind that the developers did a lot of testing with the health regeneration. They tweaked it so that it works, but doesn’t give you the ability to just run and gun, and then wait for your health to regenerate so you can go crazy again. If you do this, you may get lucky, but sooner or later, your luck will run out. You will need to use stealth, along with your other abilities, to find that sweet spot that best fits your style of gameplay.

The other interesting part of this game, that I would like to bring to light, are the different ways you can do things. From the video, you’ll notice that you can enter buildings by taking guards out, or just waiting for them to leave. You can also look around and gain access to the building through vents or other areas like, say, maybe a roof. After all, Adam Jensen is a security expert. This kind of thing is what he does best: finds weak areas and exploits them… Well, that and kicking everyone’s ass.

Once inside a building, you will be able to do some of the same kind of things, such as gaining access to different areas that you are interested in. One of the choices you will have is to hack things; by doing so, you will gain experience, which is always good. Remember, the more experience you get, the faster you can enable different augmentations. The only problem with this is that everything is easier in the beginning; as you get further in the game, hacking things will get a lot tougher. If hacking isn’t your thing, you can always look for the key codes around the office or by searching enemies that you have beaten into submission.

Another video that I want to bring to your attention is the one below. The reason for this is that it gives you a look at the inventory, augmentations, and hacking. Since I couldn’t capture the game footage, this is the next best thing. Notice that, at 20 seconds in, it gives you a window of the augmentations. Now, understand that your body is fully equipped with all of these augmentations from the start, but that doesn’t mean you will have access to all of them.

Think of it as being a baby. You have to crawl before you walk. It’s going to be the same kind of thing here, without the crawling. As you complete tasks, you earn XP; as you earn XP, you get to unlock new augmentations. Do keep in mind that augmentations cannot be reversed once you have unlocked them, so selecting the ones you want is pretty important.

The other point of interest in the video, if you want to have a look at the way you will be selecting weapons, is at 33 and 48 seconds. Weapons, such as guns, are at the top of the wheel and things, such as EMP Grenades/Mines, are at bottom. This should give you the ability to really focus on the gameplay instead of trying to cycle through everything that you may have.

The entire interface seems to be really sleek and well thought out. This gives you a view of the hacking window. If you notice, there are a bunch of different nodes on the screen. What you need to do is get to the server to get the information that your searching for, which looks like a red file stack, but turns blue as you hack it. We were told that in the beginning, it’s all pretty simple, but as you get further in the game, it’s going to get a lot more difficult. The harder you make your hacking path, the more XP you will be awarded with, which is always great, since you can use that to unlock new augmentations.

If you want to look at the entire inventory screen, go one minute and twenty-one seconds in. This gives you an overall view of your inventory, which really lets you dig deep to look at everything that you are holding. This is also the window that lets you combine different weapons and ammo. For instance if you want your gun to have explosive rounds, give it explosive rounds. If you want your mine to detonate, give it a detonating ability, or maybe a gas attribute, if that’s more your style.

This game is going to be very brutal, customizable, and packed with a lot of action. I don’t ever say this, but it seems like there is a first time for everything: first day buy for me. Look for it on store shelves August 23rd in North America and August 26th in Europe. 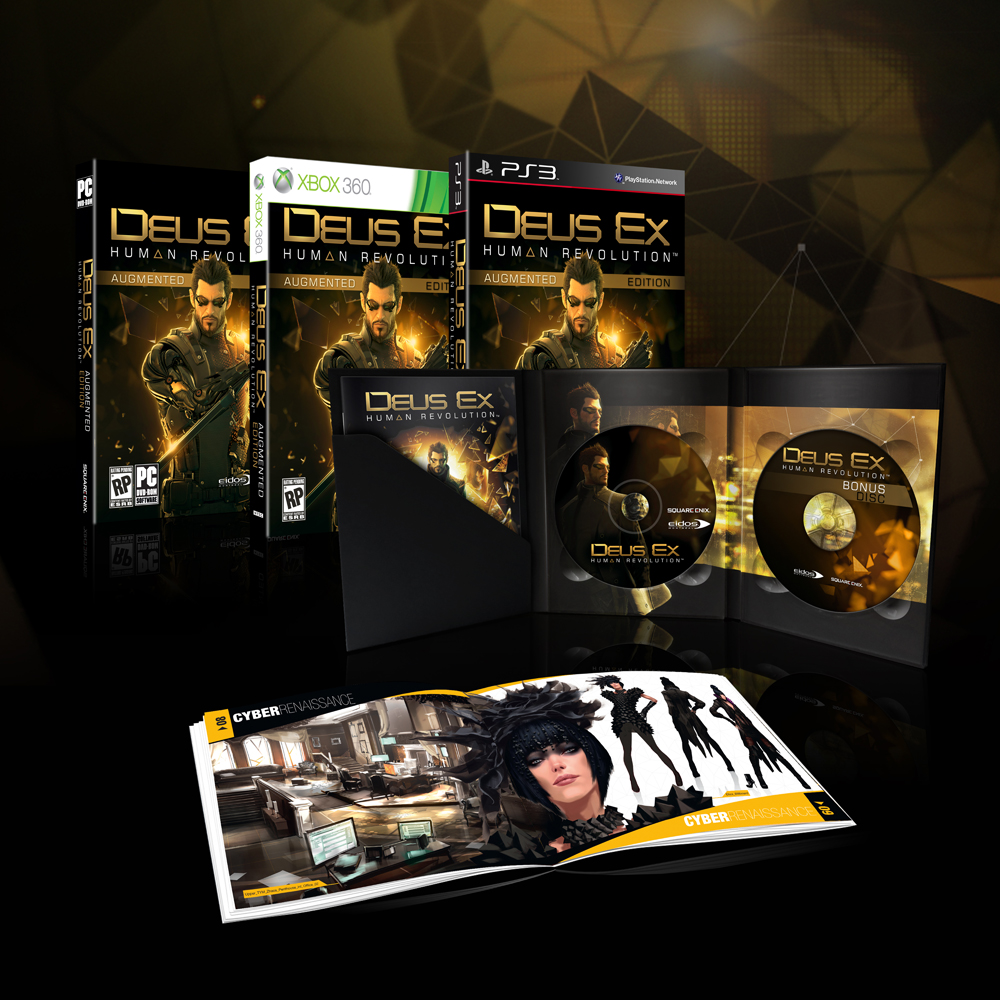 These are several of the Questions and Answers from PAX East 2011 after the footage was shown:

Q: Will there be a sword in the game like in the original Deus Ex?
@Jeffachoo A: No, there won’t be a sword where you run around lobbing peoples’ body parts off.

Q: How many weapons will there be in Deus EX: HR?
@Jeffachoo A: We are not able to give you a specific number, but there will be a bunch of different ones.

Q: Were you influenced by different games when coming up with the art?
@Jonatchoo A: I looked at different architecture, books, movies and games, but games were the very last on the list.

**The crowd abrupts in laughter**

I have since checked with @DavidAnfossi and he has told me that it was all in good fun. It’s good to see that he can take a joke.

Q: Does Adam Jensen have any relation to JC Denton from the original game?
@Jonatchoo/@Jeffachoo A: That’s a very good question… No really it’s a really good question…