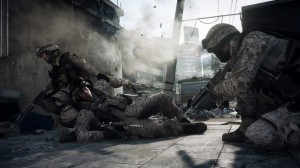 Speaking in an interview with Games.on.net (via Eurogamer), the firms General Manager, Karl Troedsson, said that they want to include a single player campaign in the multiplayer-only series to attract new players in the game.


“Naturally we want to introduce more people to our franchise,” he said. “A lot of people don’t want to jump straight into multiplayer. They want to feel around a bit and they’re ready to move over to online.”

“The hardcore online people, they don’t care, they’re just straight in. Maybe they don’t even touch the campaign. But we want to get more people in, invite more people into the franchise. That’s one of the main reasons why we have this different part of the game.”

The length of the single player campaign was brought about because of THQ’s recent shooter, Homefront, which received negative feedback from lots of gamers for its five-hour campaign. Battlefield 3 is slated to arrive on the PS3, Xbox 360 and PC in October.