I was lucky enough to have the chance to review Warriors: Legends of Troy for you. I’m going to lay out each aspect of the game, a conclusion, and score at the bottom, based upon my time with the title. Let us begin.

Graphics: The look of Troy is rustic and gritty. This isnâ€™t a game full of color and mind blowing graphics, but it works. The environments are built for one thing, and that is war. Dust kicks up amongst soldiers’ feet as they slide for a footing while swinging their swords. Sparks fly as metal hits shield; all in all it looks good. If I had to find something bad in the models, it would be the Gods. The intro for them look a thousand times better than the actual models do. The lack of attention is seen more when performing quick time events on them. With all the characters looking good, it is a shame the same time wasnâ€™t put into the bosses. 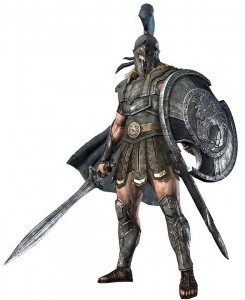 The characters are well done. They are polished, and the engraving on armor and shields is easily noticeable. There was a lot of time spent on each character, and it shows. With you focusing so much on your character, it was nice to see this polished out. There are some really cool wind effects after you pop your weapon out of an enemy’s skull. You spin 360 degrees and the air around you warps for a rather cool lighting effect. Whatever Koei was aiming for with the look of this game, they achieved it. The look is definitely unique.

Sound: The voice acting is well done, which was a welcome surprise. The dialogue in game cut-scenes works, and the talking amongst soldiers on the battlefield and while in battle is spot on. The narrator is the only voice actor who seems to be trying to put on an accent.

The sounds of war are just what you would expect. Swords sound like swords, impaling an enemy leaves the sound of blood gushing, and surrounding enemies yell as they witness their commander getting man handled. Rather entertaining, to say the least. I particularly like advancing and hearing the whistle of a thousand arrows flying down from above; raising your shield and catching what was meant for your skull just adds to the ambiance of sounds around you in the battle.

The music fits the time period, and there is a large variety of it. There are a total of 53 tracks that you can unlock. That is quite the soundtrack. You add in the 54 cutscenes and you can tell the sound department was busy in the studio on this title.

Game play: Koei is known for large scale battles and simplistic, yet enjoyable, button mashing. Typically, you see a large swarm of enemies and you run in and drop them like nothing. This is not a button smasher folks; if you smash buttons you will die. You see a huge swarm ahead and immediately plan your attack. Your combos are going to do way more damage if perfectly timed with each swing. Spear men will hit you from all angles, forcing you to go into an immediate impalement of a nearby Elite enemy, buying you crucial time as you lift him in the air by the head, displaying him for all to see.

The enemies will back up and look from behind their shield, allowing you the perfect opportunity to release your kill, spinning 360 degrees, and opening up a new chain of combos. Once an enemy has been impaled and released, there is a quick opportunity to press your heavy attack, causing your character to perform one of many finishers. Achilles will drop the impaled and do a flying super man punch, thrusting his sword into the neck of an enemy. If you have seen the movie â€œTroyâ€, you know exactly what I am referring to.

When you meet up with a key player, the soldiers will surround you in a circle, allowing you to fight one on one with the challenger. This is where block and parry become your best friend. You need to parry, parry, and parry your way to victory in these battles. There is no way you can swing away and win. You can roll behind and score some hits or keep going in and out to build up and release your fury.

The Fury attack is more of an adrenaline rush which speeds you up and slows the enemy down. This is the only time you can mash away, trying to pull off your biggest combo. Blood will fill the TV screen with each successful hit for an interesting effect.

What I really enjoyed was being able to pick up any dropped weapon and wield it. The combos are different for each weapon class and the greatest feature is the ability to throw them. There is nothing like running up to an Elite soldier surrounded by his peons and simply throwing a spear into his chest from a distance. The camera zooms in on the thrown weapon and follows it to its target for a rather cool effect.

There was countless times when I impaled a super soldier and his followers stood there screaming in shock. Better yet is watching scared soldiers flee in terror and picking up a sword only to throw it and drop him before he turns the corner. Doing this multiple times will earn you the, â€œThat’s just meanâ€ trophy. Dropped weapons simply add to the already great game play.

While all this is going on, your are earning Kleos, which is the game’s source of money. Each and every hit and combo, plus finisher, can greatly increase the amount earned. This is a great feature which reminds you how well you are utilizing the battle system. Kleos is then used to unlock a large amount of items to dress your character’s stats with. Let me tell you, if you want to play this on hard or expert, you must invest the time gearing out your characters. The items are not cosmetic, so you will not see any changes to your character visually, but you will notice them in terms of health bar and damage. Items can also be used to further add to your combo arsenal and your allies attacks.

My one gripe in the game is the ever so awkward God of War moments where you are fighting a God and, all at a sudden, you are in a quick time event. This simply didnâ€™t seem to belong. They were far too easy and not well done. The battle with Apollo was drawn out and threw the pacing of the game off for me. I still have no idea why this was even in the game; it baffles me.

Story: The story is all over the place, but it works. The story is told from many characters’ perspectives, allowing you to play each story line and watch how it all comes together in the end. This not only keeps you interested, but it keeps the gameplay fresh for each level. The story of Troy has many variations and some either include the Gods in its telling, or donâ€™t. This one happens to and it would have done just fine without it, in my opinion.

Games like these, typically, are not focused on the story, which is why I was surprised to see the large amount of cut-scenes and large dialogue track that accompanied them. What also keeps the gameplay fresh causes the story to get rather confusing. Switching from character to character felt like I was all over the place, in terms of following the story. Was I Greek still, or did I just get thrown to the Trojan side of the story? Luckily, you can watch all 54 cut scenes after you unlock them to get the full story, without the distraction.

Warriors: Legends of Troy is a must own for any Koei fan. It is a breath of new life into an already great genre. Those who aren’t the biggest fans of Hack and Slash may find a deep enough combat system to keep them interested in a rather long campaign. Buy, rent or pass? This is a buy for me. Those looking to blow through a game over a 3 day weekend could easily rent it and do so, if they can set aside a good amount of time. With 100 items to purchase and 48 side objectives, followed by the challenge arena mode, you’re going to have a lot of time to put in to pop that Platinum. I began playing at 2pm Friday and quit 11pm that night, picking up my gaming session the next day at 11am and finishing it by 2:30pm.

This review is based on a retail copy of the PS3 version of Warriors: Legends of Troy provided by Tecmo Koei.