MiniSquadron is a new game up for grabs on the PlayStation Network that, as has usually been the case before, is already available for other services… but is just now seeing a new life in our Sony branded portable and current gen console. Here is what the publisher has to say about this game:

MiniSquadron is a frantic shooter involving lots of little planes vying for the supremacy of the skies! Take control of one of your airplanes and fight for the victory, using crazy weapons and incredible aerial stunts!
–
After being named the #3 iPhone game of all time by AppAdvice.com and successfully launching on the Android and Palm platforms, PlayStationÂ®Store is the next destination for MiniSquadronâ€™s supremacy.
–
Conquer all eight worlds, use huge lasers and homing missiles, and unlock over 50 airplanes, including jet-fighters, alien ships, giant octopus and a flying panda!
–

It’s easier to start this with some moving pictures so you can understand what we’re talking about:

After all that info has been slowly and carefully digested by your brain like a protein heavy meal (wait, doesn’t the stomach do the digestive work? Oh well, that’s metaphors for you!), we can get this show started. There are two modes unlocked right from the start: Classic and Survival. Classic is the story mode (as much story as this could have) of the game and, as has been said above, it contains 8 levels with 12 waves of enemies per level. All enemies are of the flying variety and you have to defeat all 12 waves to win. There’s a little heads-up before each wave so you know what you’ll be up against and can plan accordingly… and the “plane” designs just keep getting weirder and weirder as you move on from wave to wave (but in a good way!). Survival is what we, back in the day, used to call endless mode and in here, you must down as many enemies as possible before all your lives have expired, so, technically, you could go on and on and on and on and on… okay, you get the idea.

You’ve got to be careful when making a fast paced dive or deciding a u-turn is the right evasive action since flying too low will result in you crashing and burning your lovely multi-colored plane. You’ve got 3 hearts to start things off (upper left corner, represent!) and lose one from crashing or being shot down. You DO get a warning when you’re flying too low (text on screen, yellow-colored warning AND a sound alert), so doing so is only your fault.

When you get shot, your plane will start to burn, or, at least, I imagine that’s what happens since there’s no fire per se, but smoke is definitely coming out of your gravity defying vessel… no wait, just got shot again, and there certainly is a flame burning, burning inside! Damn, got shot again and now I’m freee faaaaallling. 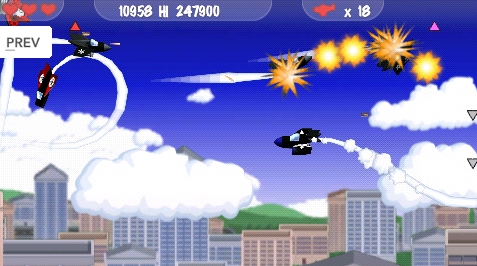 There’s a lot of planes to unlock and each one has different values in each of the main attribute categories (Cruise Speed, Dive Speed, Armor, Size, Turning Rate, Reload Time and Weapon Type). After trying out several of the planes I unlocked (you’ll get your first one in 3 minutes tops, and more follow depending on how good you do on each level AND if you’re replaying them, you’ll get more since you’ll be using a better plane the second time around), I decided that a faster plane with a not-so-great weapon was the way to go… until I unlocked one that was slow and heavy BUT came pre-equipped with homing missiles! That definitely changed how I approached each level and I’m also thankful for all the power ups that drop on screen. What are said power ups? Glad you asked (spoiler proofed for your protection):

Disappear so your enemies don’t know what hit them.

Gives you an extra life. At first, they’re easy to catch but on later levels, they start behaving like enemy planes and fly away from you!

Repairs some of the damage done to your plane.

The duh strikes back.

Return of the duh… ha, fooled you! Slowdown is actually BAD for you since ti makes your plane bigger and that makes it move slower. Bigger target and lower speed? This power-up is soooo baaaaaaaaaaad.

Levels take anywhere between 10 to 20 minutes to complete at most, and while you’re doing that, classical music plays in the background, which my 2 week old daughter loved. It even helped her fall asleep and rest, which was a great argument when I said to the wife this was basically a win-win situation all around, since shooting and relaxing has been scientifically proven to be full of winning, and winning is part of a nutritious breakfast.

After a couple of waves, you’ll get to relax for a bit, since you’re tasked with shooting down non-hostile flying things. I encountered ducks, bats, toucans, octopi and crazier non-planes during my adventure, and seeing how easily they would go poof was very satisfying and got me ready for the next wave of “they actually shoot at me!” wacky planes.

While playing, you’ll notice some arrows at the edge of the screen popping up. Don’t worry, these are actually good news! The arrows will point out where your enemies are coming from as well as their current flying altitude so you can plan accordingly and be ready to dodge, dive and shoot. Since this is a minis, and most will play it on the go, you’ll be happy to hear that there are checkpoints between every couple of waves so you can continue in case you loose all your lives, but getting to said checkpoints also awards you with a score bonus screen for your old school arcade gaming needs. 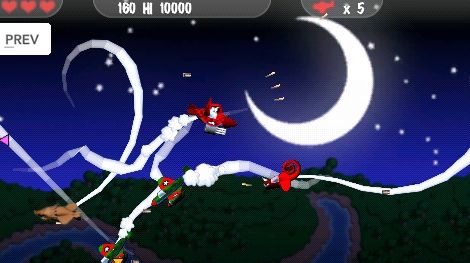 Once you’ve finished all 8 levels, you can try to beat your highscore and completion time for each one, and it’s here that I have to remind you that destroying your enemies one after an another (in a row, if you will) without being hit will increase your multiplier, which greatly affects how many numbers end up decorating your final score (faster planes have a smaller hitbox but have a tendency to run into bullets since they’re all over the place).

At less than $2 (less than $1 for PS+) you really can’t go wrong, and you’ll have a lot of fun with Mini Squadron. An epic adventure this is not, but an epic adventure is not what we’re looking for in a $2 game (see A Space Shooter For Two Bucks for quick a reminder).

Published by Grip Games
Developed by SuperMono and Grip Games

– Completed the game before writing this review
– Total amount of time played: 5 hours.
– This review is based on a retail copy of the PSP version of MiniSquadron provided by Grip Games. 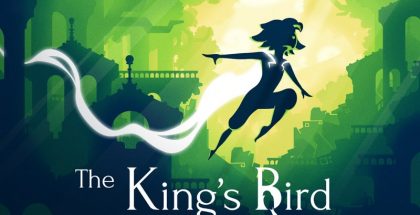