Admittedly, I now feel that I have missed out on 3 epic segments of this franchise after playing such a gripping game. I got started by slipping the disc into my PS3, not knowing what I was going to experience. I decided not to search up Yakuza 4 on the net, as I wanted my experience to be as original as it could be.

Before you actually start playing the game, you have to go through a mandatory install, which takes around 10 – 15 minutes – which is pretty common these days. Though like most games, this install had a different feel about it. It took the opportunity to introduce you to the characters of the game, what role they play, and a little about their background. This for someone like me it was just the perfect introduction. The virtual environment is based on Tokyo, Japan, with the virtual world looking as bright and beautiful as the real Tokyo itself.

The main characters of the game (most of you who have played any of the Yakuza outings may remember some of the following characters) are Kazuma Kiryu, Masayoshi Tanimura, Shun Akiyama, and Taiga Saejima. All of these characters are connected to the plot of the game.

The game itself is split up into 4 parts, with each character having approximately 4 chapters each.

Once the game starts, you take on the role of a loan shark, Shun Akiyama, a one time hot shot who turned into a homeless body that lived on the streets of Kamurocho, who lost his job and his life’s work by being framed for something he didn’t do. However, one very lucky day, his luck changed and vowed to help those who needed money when no one else was prepared to lend them any. However, there was one condition – they had to pass a test before any cash traded hands.

Akiyama isn’t a member of the Yakuza. He’s just fortunate enough to know what’s going on in city, and tends to poke his nose in and out of the business of the Yakuza family – eventually landing him right in the middle of it all. So let’s cut past a few of the cutscenes and some basic challenges. Enter a rather beautiful (yes I know it’s only a game) lass called Lily. She is the glue that connects all of the four characters together. She turns up one day to borrow money from Akiyama, and this isn’t just a regular sum. This is when things start to get a little interesting.

Let’s leave the storyline just there and rather than give the game away completely by telling you all about the trouble that follows Akiyama and the other characters I’ve had the pleasure of meeting, let’s take a look at the other areas of the game.

Whilst following the storyline, you’re constantly haggled by street yobs who just either want to mug you or want to give you a beating for fun. This is where you get the chance to build upon your fighting experience and earn yourself some Soul points. You can redeem these so called Soul points for new fighting moves, which help you to defeat even the toughest of opponents. You can pick up weapons and items off the street and use them to aid the beating of these so called tough guys. You can actually pick up a bike and smash it around the head of those looking to give you a kicking, never mind Samurai swords and other weird items. 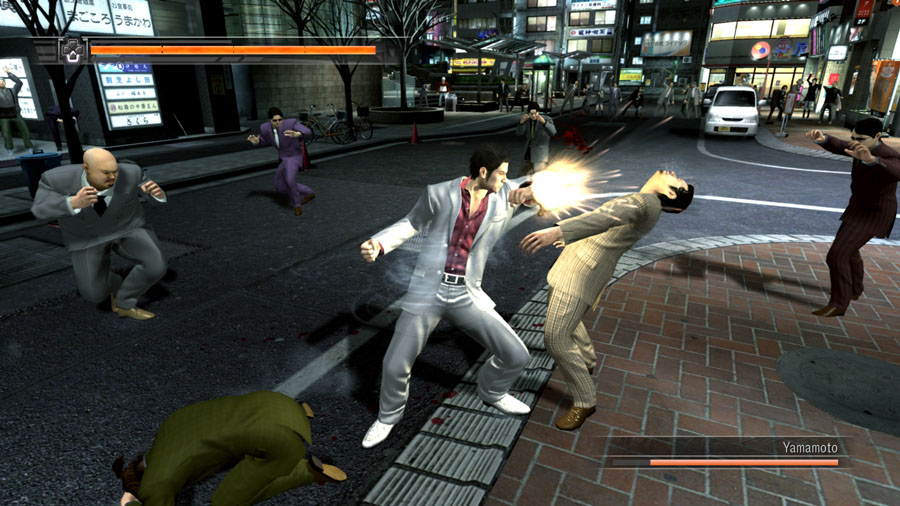 The fighting is just awesome. This is where the button bashing begins. Combinations upon combinations of buttons allow you to perform many different moves and some – just make your jaw drop. If you’ve played Tekken, you know what I’m on about.

Even though you’re beating up thugs and getting involved in sticky situations, at times you do end up getting dragged down to the local dibble (police station) for questioning, and the officer who’s constantly on your back does well to promote a bad cop reputation.

Now for the location. The game itself is set in Tokyo; the streets are always busy with tourists, residents etc, and because of this, you can chat to most of the non-important characters of the game. This is an excellent addition, as the developers have added a nice slice of humour to the game, as you find yourself on many an occasion involved in conversations which will make you chuckle, and if you’re the sensitive type – bring a tear to your eye. I’ve personally never been to Tokyo, and whilst you’re roaming around the streets, you certainly get a feel of what the place may really look like.

Does the game have a true sandbox environment?

Most sandbox games tend to let you roam around the virtual world and wreak havoc, and as I mentioned earlier, this is the first Yakuza title I have played – the sandbox world is more or less restricted to the storyline. That’s what I loved about the game.

With huge titles such as Grand Theft Auto, the sandbox world proved to be a killer feature, but for me, I found myself constantly wandering around, barely completing any challenges and then an hour or two later getting bored. The majority of the time I skipped the cutscenes as I was barely interested in them due to being zombified by the gameplay. With Yakuza 4 – I was constantly gripped by the storyline, I didn’t dare to skip any cutscenes – did I mention I was gripped by the storyline?

Does the audio make a difference to the game?

Even though the speech in the whole game is in Japanese, the subtitles provide you with a detailed translation to what is being said. I love foreign movies, especially when they have subtitles – hence me and Yakuza 4 were a perfect fit.

I felt the actors who provided the voiceovers did an excellent job of providing a good feel of the cutscenes.

How do you rate the gameplay?

With the game packing in 30+ hours worth of gameplay, in my mind, it is worth every penny. The game itself is quite addictive – with it leaving you thinking what is going to happen next? I couldn’t help myself picking up the controller and just having 30 minutes here and there when I really should’ve been doing the chores. Shh…don’t tell the wife!

The graphics for the gameplay are great. The colours (Sorry for the spelling – I’m British) are superb, and as mentioned before, the textures are highly detailed. They certainly bring out the best of the environment, whether it be day or night. The gameplay animations of the characters are very well executed – smooth movements etc. However, there is a downside, as the cutscenes feel and look quite rough. Especially on a 37″ HD screen! The outlines of the characters during the animations look very jagged and take quite a bit away from the game, as the game is at least made up of 70% cutscenes.

If you’re a fan of a sandbox game with no restrictions, and/or you don’t like to be restricted to a story line and just cannot be bothered with cutscenes to let the story flow – then this game isn’t for you.

However, if you’re into games with Story Lines, like for example Uncharted etc; the you’re gonna love this game. Don’t get me wrong, I’m not comparing this game to Uncharted – but the gameplay is on a similar level. This is one game I am glad not to be missing!

This review is based on a retail copy of the PS3 version of Yakuza 4 provided by Sega.