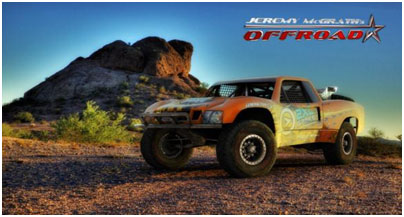 It has officially been announced that an upcoming offroad racing title featuring Jeremy McGrath’s namesake will be heading to PSN/XBLA this summer. The title is being developed by 2XL (started from former employees of Rainbow Studios, which is now THQ Digital Phoenix), which have a pedigree in these types of games, and will be published by Reverb Publishing (by D3Publisher on the 360). Not much is currently known about the game, but information will be further detailed before E3 at the Lucas Oil Off-road Racing Series event in San Bernardino, which takes place next weekend on May 21st and 22nd.

*Twain Harte, CAâ€“May 12, 2011â€“*Reverb Publishing and developer 2XL Games announced today that *Jeremy McGrathâ€™s Offroad* will race to consoles via the PlayStationÂ®Network. The video game will also be available this summer from D3Publisher on Xbox LIVEÂ® Arcade.

Founded by former employees of Rainbow Studios, 2XL Games has a tremendous pedigree and experience within the video game racing world, having developed titles like *BAJA: Edge of Control* and *2XL Supercross 2009*, as well as having worked on titles like the *MX vs. ATV* series and *Cars: The Video Game*.