MediaPS3Ratchet and Clank: All 4 One
2 Comments

Release Date, Box Art and Pre-Order Incentives Announced for Ratchet & Clank: All 4 One 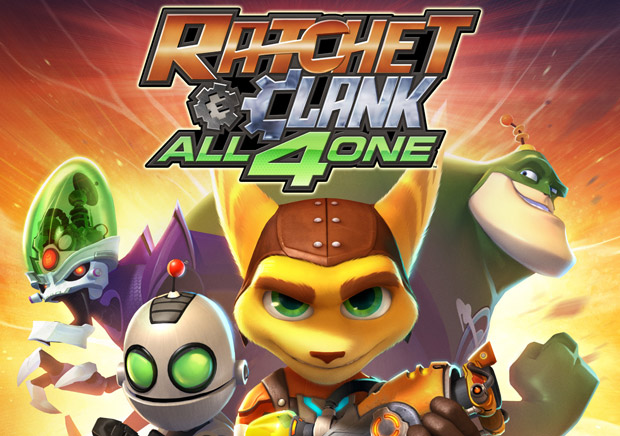 The award winning developers of the hit series Ratchet & Clank are back for another adventure, this time you and 3 of your friend’s can come along. The game features a new coop mode with an exciting array of weapons. Insomiac games, the developer of the series promised a new perspective when it comes to playing coop multiplayer, as in the past, coop games relied heavily on the other players to be on the same screen in order to keep the game fluid. This game however offers up a unique answer to the dilemma.

Gameplay and Pre-order Incentives after the jump:

Ratchet & Clank All 4 One drops October 18, 2011 with special preorder incentives from the following:

Mr. Zurkon (GameStop): Asmall, hovering synthenoid, Mr. Zurkon aids your team in battle by attacking enemies with his mounted laser while insulting and taunting them with his comedy-insult logic processor.

T-Rex Morph Mod (Amazon): Turning enemies into farmyard animals not your style? Want a more prehistoric take on the Morph-O-Ray? Use this T-Rex Morph Weapon Mod to transform your enemies from dangerous threats into a baby dinosaur.

Pyro Blaster Unlock (Best Buy): Fry your enemies up with this Kerchu-engineered flamethrower that offers your enemies two choices: regular or extra crispy!

Sheepinator Mod (Wal-Mart): The classic version of everyoneâ€™s favorite Ratchet & Clank weapon is back! Unlock the Sheepinator Morph Weapon Mod to transform even the fiercest aliens in the galaxy into harmless sheep.

Hunted “Around Dark Corners” Trailer Shows More Behind the Scenes