As Sakinah pointed out here, a Resistance 3 Demo will be available with the Battle: Los Angeles BluRay on June 14th. At the time, it was thought to be US only, but now it seems, that not only will there be a demo, but that it will be an exclusive level, and will be available world wide. 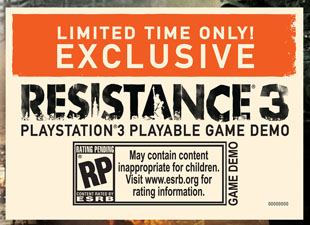 Check out part of the Press Release Below:

“Exclusively available on the BATTLE: LOS ANGELES single-disc Blu-ray for a limited time is an exclusive playable game demo of the first-person shooter PS3 game Resistance 3, the latest installment in the multi-million selling post-apocalyptic franchise, coming in September from developer Insomniac Games and Sony Computer Entertainment America. In addition to the incredible thrills of the year’s top action/sci-fi film, Blu-ray fans around the world will be the first to sample nearly one half-hour of game play from the upcoming Resistance 3, assuming the role of hero Joseph Capelli as he travels by boat to St. Louis through the flooded and deadly waters of the Mississippi fighting off a relentless alien race, the Chimera. This exclusive level will also be available on BATTLE: LOS ANGELES Blu-ray discs around the world, marking the first global Blu-ray/PS3 game demo hybrid.”