Warner Bros. Interactive Entertainment will buy you a drink if you play Lord of the Rings 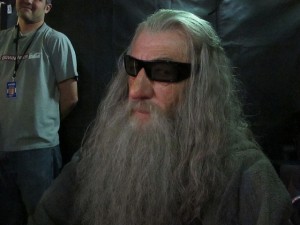 Twitpic from Peter Jackson on the set of "The Hobbit". Ian McKellan as Gandalf. Movie is being shot in 3D.

Attending E3? Ever wanted to know and feel how it would be to get your party on “Middle Earth” style? Well fret no more because according to a press release by Warner Bros. Interactive Entertainment, they will be having daily concerts and cocktail event during the expo. I will be live tweeting from that event so follow me my precioussssss!

Each day of the Expo, June 7-9th, all show attendees will be invited to visit a Middle-earth themed lounge in the South Hall Lobby Atrium, where complimentary Wi-Fi access will be available to visitors. As show floor activity winds down in the evenings, the lounge becomes the venue for a VIP cocktail party and concert, as the space transforms into a Middle-earth merry-making respite to celebrate the end of day with music, drink and the fellowship of friends. Award-winning composer Inon Zur will conduct vocalists and a 40-piece live orchestra performing selections from the original score of The Lord of the Rings: War in the North.

E3 attendees that visit the WBIE Booth (South Hall, #2401) and participate in a demo of The Lord of the Rings: War in the North will receive a wrist band, granting them entrance to these nightly concert and cocktail receptions.

Duke Nukem Forever has “Gone Gold”, but What Does “Going Gold” Actually Mean?